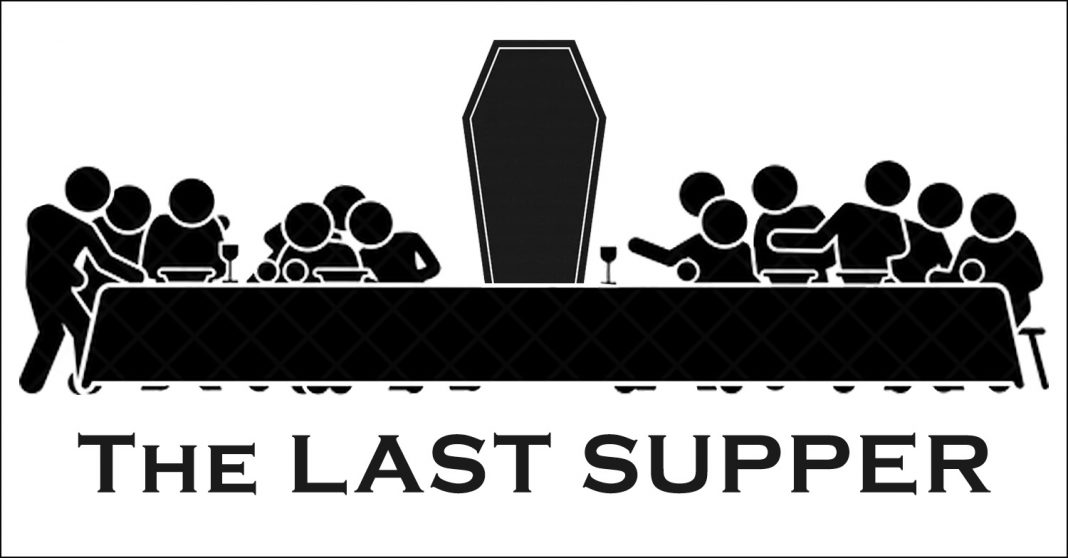 Local Start-up Last Supper has been forced to call in receivers due to serious drop off in sales.

The start up opened up with huge fanfare only three months ago and had teamed up with some of the city’s finest chefs and hospitality and health professionals.

The company had promised to turn the remains of a loved one into a delicious three course meal for up to twelve relatives but due to recent lack of interest has had to close it’s doors for the final time this Friday.

“We started with a flurry of orders” says Last Supper CEO Christie Corpus “It was all looking really promising. We were a breath of fresh air in the stale halitosistic world of death. Business was good then we had the ‘gold nipple ring incident’ and that was that.’ says Corpus making air quotes.

‘Gold nipple ring incident? What happened there?” I ask.

“Well we had a request for an Italian themed banquet to celebrate the death of a popular Morningside pensioner. So we made meatballs for starter followed by his favourite meal of bolognese and finished with a panacotta for dessert. The corpse was a fairly big one so there was no issue with quantities.”

“Our chefs boned and filleted the corpse and minced the flesh down and made the most delicious bolognese but somehow a tiny gold nipple ring had made its way into the mix.”

“I mean what sort of pensioner has a small gold nipple ring for f*ck sake! What’s the world coming to?” curses Corpus.

“If you ask me I think one of the guests planted it in the hope of getting money off the bill. That’s between you and me though, right?” says Corpus

“Of course” I reply “My lips are sealed” I pretend to seal my lips with my thumb and index finger.

“Anyhow come the banquet, we really pushed the boat out for this one. Some really rich folk were going to be there. We even splashed out £75 to get Pope Francis to send a blessing via Cameo. He charged us an extra tenner for the Latin version. We projected it on to a big screen and everything ”

“Then the starter was served. So far so good. Then the main meal and all of a sudden there’s a great big hullabaloo. One of guests bit down on the nipple ring and there may have been a little bit of nipple still attached.”

“She screamed like a feckin banshee. You want to have heard her! There was a big panic and it all got real messy real quick.”

“We tried to settle everyone down again”

“Next thing you know its all over social media and at that stage the ball was over the wall. All bookings cancelled and our business just dropped off a cliff edge.”

“So despite some frantic PR and Halloween special offers to try and rescue the situation unfortunately it was to no avail and we’ve had to close our doors” lamented Corpus.

“The gluteus maximus graveyard cupcakes and the tonsil tombstone brownies were to die for.” he continues “As for the broken finger cookies, made from actual broken fingers no less, it was hard not to smile when you see those little beauties.”

“So what’s next for Christie Corpus?” I ask.

“Well every cloud has a silver lining.” enthuses Christie.

“We will soon be opening ‘Save Our Soles’ where we take the hide of your loved one and transform it into all sorts of wearables such as shoes, gloves, wallets, purses, handbags and waist coats.”

He pulls a wallet from his inside pocket and turns it towards me. There’s a grey moustache above stretched smiling lips on the back.

“I loved his smile and now I shall have it with me forever” laments Corpus.

It does look a little disturbing, it’s a bit too Burke & Hare for me, but I try not to show it.

“Well the very best of luck with your new venture” I say.

He doesn’t reply, just stands in silence smiling back at his wallet.