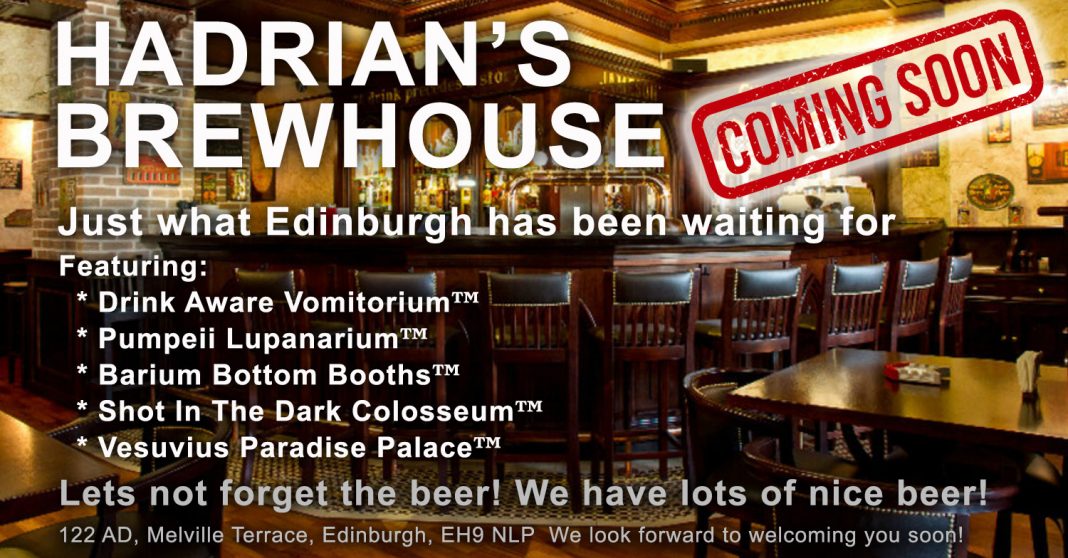 Edinburgh businessman Malti Hops has announced his return to the business arena with plans to open a Roman themed Brewhouse on Melville Drive in the city.

Hops had been banned from running a business for seven years after his previous enterprise Hops Scotch was ruled to have been promoting the consumption of whiskey among school children.

“That was a massive misunderstanding” replied Mr Hops when I asked him about the ban.

“Next thing you know it gets blown out of all proportion by the media and I get banned and the company is dissolved.”

“Anyway that’s all in the past now. We’ve learned from it and are moving forward like a finely tuned Roman garrison with our new plan. Hadrian’s Brewhouse.”

“So tell us a bit more about this new brewhouse of yours” I ask him.

“Well we got the idea of a Roman themed brewhouse on Melville Drive from the fact that the Romans once built a road right along the street taking them to their base in Cramond. This was long before Melville Drive even existed of course” replied Mr Hops.

“Of course” I nod in agreement.

“So from that we came up with the idea of Hadrian’s Brewhouse. Hadrian being the one responsible for the building of Hadrian’s Wall not far from here actually” continued Hops pointing towards Fife.

“Indeed” I reply continuing to nod in agreement.

“So in keeping with Roman culture our brewhouse will have the Drink Aware Vomitorium™ for those who have had a few too many but would like to continue drinking, responsibly of course.”

“Of course!” I reply continuing to nod in agreement. The nodding then begins to hurt a little so I stop.

“We will also have an open plan Pumpeii Lupanarium™ for clients, who have hit it off and fancy a quick knee trembler without having to go outside. It does get a bit chilly round these parts, especially in the winter.” says Mr Hops

“It does indeed. January and February can be particularly brutal here in Edinburgh or should I say Edinburrr!!” I reply with a little giggle and pretend shiver.

“Not the weather for a bit of out door how’s your father” I continue, giving Mr Hops a little nudge with my elbow.

“We will also provide private Barium Bottom Booths™ for a little extra of course. Very clean and no cameras. We will of course cater for groups as well.”

“And for the hot heads out there who fancy lettin off a bit of steam with their fists we will have the Shot In The Dark Colosseum™ sponsored of course by local Dalry bookmakers Shot In The Dark. They will also be opening a book on each fight so everyone can join in.”

“There will be an Hadrians Brewhouse app coming soon so anyone can tune in to watch a fight and place a bet. Really exciting stuff!” enthused Mr Hops.

“And last but not least and this one has to be off the record ok? You can’t print this. Deal?”

“We will also be opening the Vesuvius Paradise Palace™ where clients enter two at a time to indulge in some of the old Roman garrison marching powder.”

“I think I understand” I reply. “You are providing a room for your clients to use for the purpose of the consumption of elicit drugs. Is that correct?”

“In one!” says Mr Hops clapping his hands together. “Strictly off the record though.”

“My lips and nostrils are sealed” I assure him with a little wink.

“So when will you be opening your establishment?” I ask.

“Well we have just secured premises directly across the road from Victor Hugo’s. We wanted that location so we could use the Romans versus the French Gauls angle in our advertising.”

“You know Julius Caesar versus Asterix sort of thing. Only this time we are in charge of the magic potions. Our very own home brew in the house!” shouts Mr Hops. Again.

“So hopefully we can open our doors in the next few weeks.”

“Well if I”m ever Roman around the area I’ll drop in” I jest “Did you see what I did there?”

“I sure did” giggles Hops “As soon as we open I’ll give you a call-igula!”.

“Ha! When you do I’ll place an order for five beers please!” I say giving him the two finger victory sign.

“Roman numeral for five, do you get it?” I ask all pleased with myself.

“Ha! What is 3000 converted into Roman Numerals?” asks Hops.

“Exactly” says Hops before walking off.