So is metal detecting on Portobello beach really as glamorous as it looks? 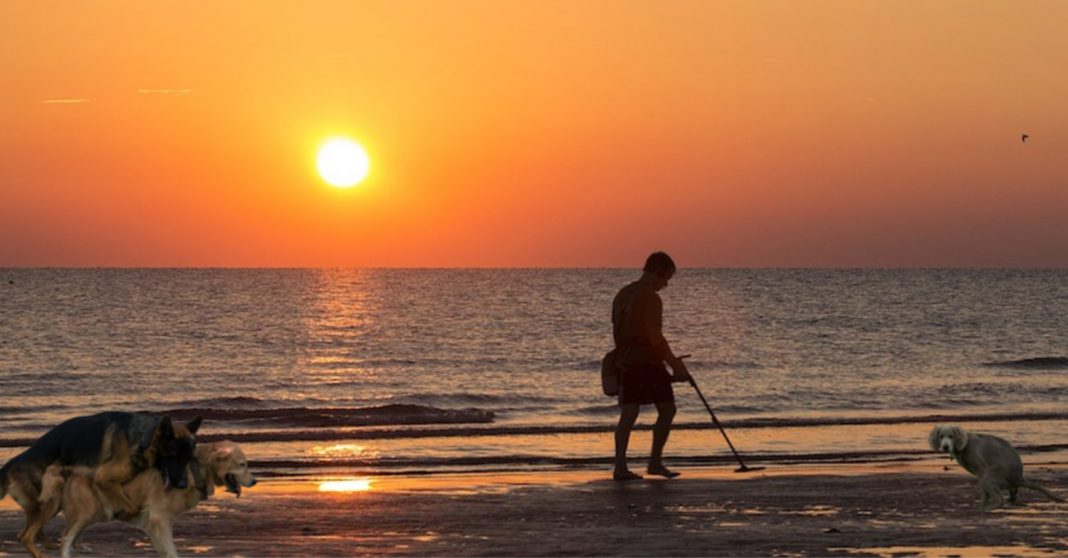 If you are anything like me then you will enjoy whiling away the hours of summer sunshine relaxing on Portbello beach when you get the chance.

If you are then you will have undoubtedly spotted more than a few sexy metal detectorists clutching their rods as they ply their titillating trade along the sea front of a summer eve.

It does appear that the number of these seductive enthusiasts has rocketed since the very popular BBC series Detectorists, directed by and starring Hollywood heart throb Mackenzie Crook, first aired in 2014.

But is being a hot metal detectorist really as glamorous as it looks?

Well I buckled my chastity belt tight and slid my dome into my metal detectorist detectorist hat and went in the search of answers.

And just like buses, after a few hours of waiting patiently on one to show up two arrive in quick succession.

We caught up with local Portobello detectorist Luke Harder to find out why he enjoyed metal detecting so much and to see if he thought it was as God damn sexy as the rest of us.

The foxy tease is wearing a pair of tight denim shorts and a figure hugging black t-shirt with the slogan in white lettering “Metal Detectorists Do It Standing Up!”

“I bet you do big man! Brings a whole new meaning to sex on the beach doesn’t it!?” I jest giving him a little wink and pretending to lick the rim of my invisible cocktail glass.

“You know!” I reply pointing at his t-shirt.

“Oh this!” he says as he pulls his t-shirt down to cover the bottom of his protruding stomach “Aye, my mum bought this for me for my 45th birthday last week” he replied.

After a short awkward pause we continue.

“Anyway, so as a metal detectorist do you think metal detecting is as sexy as we all do?” I ask him.

“Ha! Sexy!? Naw not all. I just like to go down on the beach. When I’m down there I like to get me rod out and wave it around and see what I can find buried underneath the sand. Then I’ll go home and maybe pick up a saucy Pot Noodle on the way.”

“If it’s been a good day I’ll maybe grab a couple of nice fresh baps and we make a saucy Pot Noodle sandwich with them when I get back to the house.”

“Is that some sort of metal detectorist euphemism for something?” I ask excitedly.

“You know, is that some sort of naughty metal detectorist code your talking in?” I ask as my heart rate shoots off the chart, according to my FitBit.

“No not at all. I really do like the Saucy Thai Red Curry Rice Pot Noodle and so does my mum. So if I find more than £2.50 in an evening I get one of those and two fresh baps so me and my mum can enjoy a pot noodle sandwich together when I get home” replied Mr Harder.

“You live with your mum?” I ask Mr Harder.

“Aye, I never moved out. Been there all my life. Apart from the time I went to Glasgow for the weekend in November 2004 for a metal detector conference in the Scottish Event Campus. That was a great weekend” replied Mr Harder

“Hmmm… ok. So what has been your biggest find to date?” I ask as I try to think of ways bring our interview to a close.

“I found a fiver once. That was nothing to do with the actual metal detector though. Obviously!” he giggles.

“And how are you getting on this evening so far?”

“So far I’ve found 75p and a key” he replies excitedly retrieving his bounty from his back pocket and proudly showing it to me.

“Another £1.75 to go then I can enjoy saucy noodle sandwiches with mumsy!” he rejoices.

And with that I wish him well and bring our interview to a close. I decide not to risk interviewing the second detectorist and as I walk along the beach back towards my car I can’t help but think of the quote “Never meet your heroes”.

And although Luke Harder is not exactly my hero I can’t help but think that sometimes reality really sucks and its probably best to continue to just live in a dream.

“Two pound coin!” I hear a shout behind me.

I look around and see a delighted Luke holding something above his head.