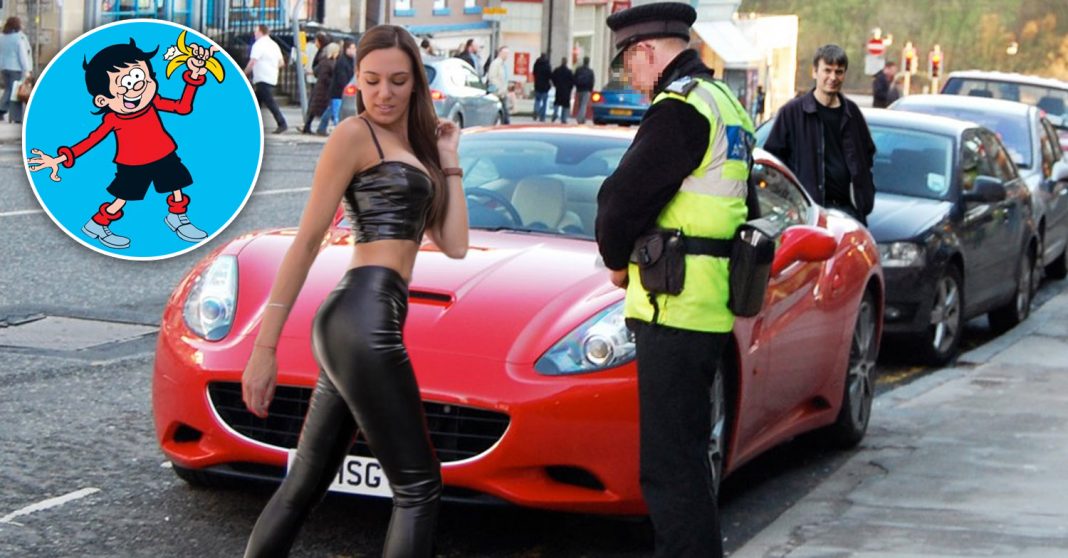 Edinburgh traffic wardens are up in all the wrong places at revelations in a recently released report that suggest 80% of them just can’t get it up in all the right places.

The report was the result of months of very hard work by a crack team of Edinburgh University’s finest scientists who employed the help of Arnold Clark car rental service and a number of sexy sirens from strip clubs located in the city’s well-known pubic triangle quarter.

One of the scientists involved told us “We sent out a number of scantily clad strippers in some of Arnold Clark’s sexiest motors. The models were wearing mics and small digital cameras and very little else.

“We asked them to drive into the outskirts of the city center and park on pavements, on double yellow lines and even in the middle of the road with hazard lights on.

“They then waited nearby until the car was approached by a traffic warden. We tried Morningside and Stockbridge first but unfortunately the wardens didn’t bite to begin with.

“They just seemed to ignore our sex kittens poorly parking. Seems to be a parking free for all in these areas.

“So we moved into Edinburgh city center and that’s when thing got really interesting!

“Like flies around shite they were. It was absolutely crazy. There’s traffic wardens everywhere in the town centre. Practically climbing out of the trees.

“They were almost fighting amongst themselves to write the tickets. Like wild apes fighting for dominance.

“But once they were approached by our flirtatious foxy felines they quickly turned into submissive whimpering little boys. Like the great Bananananaman transforming back into Eric Wimp before your very eyes.

“We caught all the action, or lack of it should I say, on camera and from our extensive analyses of the images not one of the traffic wardens showed any signs of arousal in their nether regions.

“Quite the opposite in some cases where we did notice significant shrinkage.”

“Thankfully I’m one of the twenty percent. I have no bother getting a boner. In fact I’m getting one right now just looking at you!” said one feisty traffic warden in the Grassmarket this morning.

Another warden declared “Just to be clear, I have no problems in that department. I can only put it down to the stresses of the job. Some find it harder than others. I must cope with it better I suppose.”

“I’ve never heard anyone talking about it to be fair. It has never come up in the tea room at lunchtime or anywhere else for that matter.

“I suppose due to the nature of the problem it’s very hard for a man to talk about publicly. It’s a topic that would probably require more of a softly-softly approach in private.

“But like I say it has never happened to me. Touch wood!”

A spokesperson for the council said “We are currently setting up a support group for our traffic wardens to discuss their erection issues with each other. Nothing rigid so to speak just a relaxed space to talk.

“In the meantime we would encourage them all to reach around and help each other. It’ll be very hard at the beginning but try to stand firm and it will not be as hard once you all get going.”

“Nothing is impenetrable. Use your mouths. The words will come.”