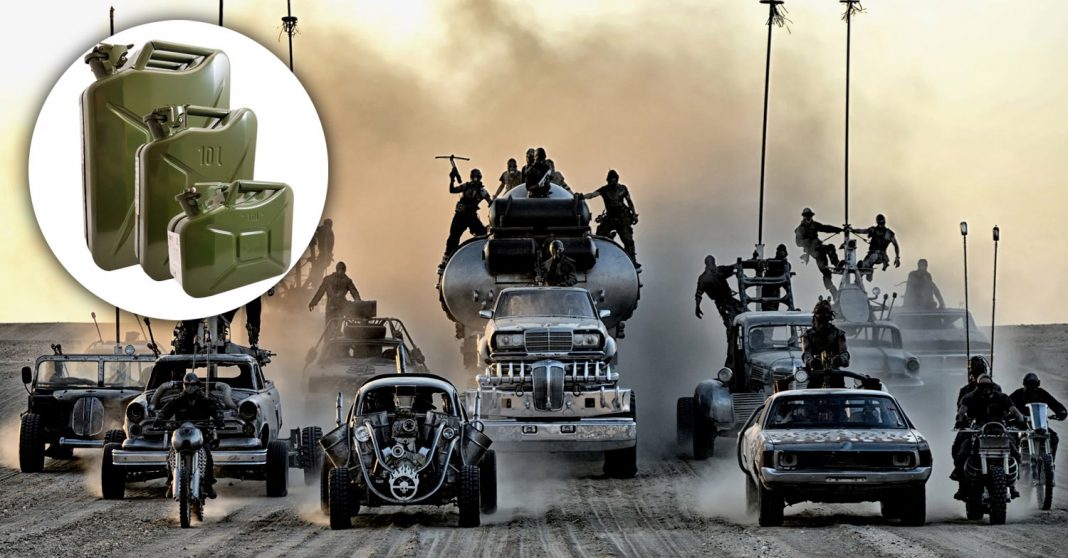 AS UK drivers turn feral as they scavenge the country for any remaining fuel canny Edinburgh residents have been taking extra precautions to avoid running out.

But fucking hell they’ve only gone and triggered fresh panic! This time for the humble jerry can!

As a result of the petrol crisis that is still gripping Scotland by the throat, sales of jerry cans have soared as more people stockpile petrol.

Jerry can sales at Halfords have gone through the roof this week and have been a whopping 17 times higher than they were this time last week.

A spokesman for Halfords said “I cannae believe what’s happening. We sold one jerry can in Scotland last week. This week we have sold 17 so far to twelve different customers as some really canny drivers bought more than one.

“It’s unprecedented. The demand is just crazy. We could see customers fighting each other in the streets for jerry cans if demand cannae be met in the days ahead. But thankfully it can. We have loads of them in stock.

“But, and this is a big but, we are taking extra precautions and training our cashiers in how to handle the pressure of scanning multiple barcodes in quick succession for extended periods

“Martial art expert and stand up comedian Dara O’Briain is beaming in live via Zoom from his Brexit proof bunker somewhere in the Snowdonia mountains to boost staff moral and to train them up in the art of self defense and food foraging.

In hindsight I could have cracked a joke about Dara O’Briain having a great sensei humour and how lucky staff were to be trained up in the art of shelf-defence but given the seriousness of the situation it’s probably just as well that I didn’t.

“Hopefully we will have no need for self defence but better safe than sorry. You just never know do you!?” continued the spokesman for Halfords

You never know indeed and as anyone that has read Lord of the Flies, or anyone that has traveled on an early morning weekend flight to Alicante on Ryanair well knows, it doesn’t take very much to tip the scales of our otherwise well balanced civilised society into the fiery pits of a bebauched Hieronymus Bosch-esque hellscape.