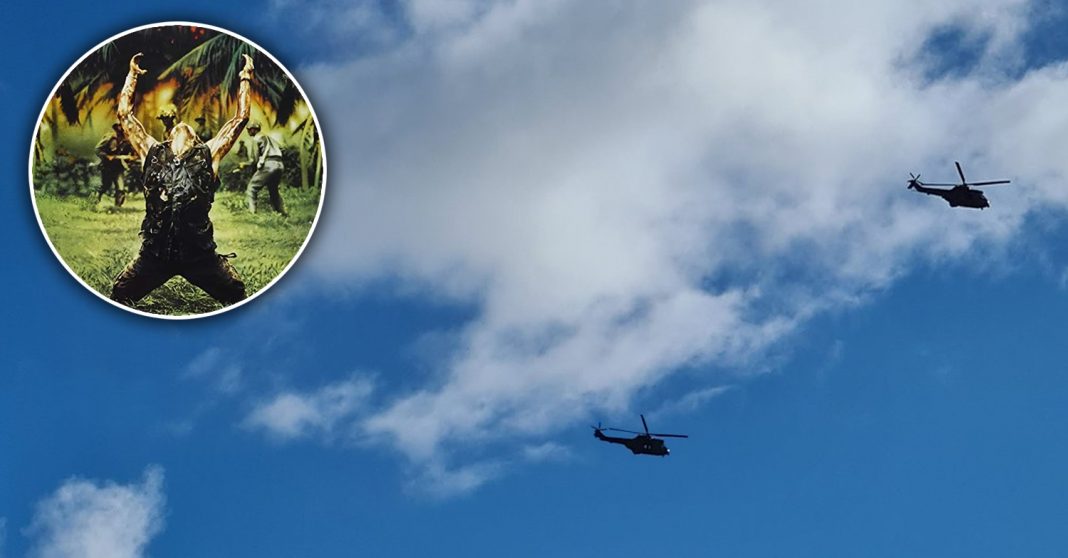 Edinburgh residents were left shocked, stunned and in fear for their very lives as two military helicopters circled the capital like two low flying hungry vultures eyeing their prey.

The two low-flying choppers, believed to be property of either the Royal Navy or Royal Air Force, were spotted flying above the city center and circling close to residential areas, schools and children’s playgrounds before flying away again.

They could have been carrying high explosives, nukes even, which would have caused absolute carnage if they had crashed into a school, a playground or busy shopping center such as a packed St James Quarter.

One frightened resident told us: “”I was working from home when I heard a really loud noise outside. It sounded louder than a helicopter. When I looked out the window there were two helicopters. So clearly twice as loud as just one helicopter.

“They circled around for a bit and then headed into the distance. They got less noisy the further away they got. It was really scary but fascinating to watch!

“It makes you think just how close to death we all really are at any given time.

“Just think, they could have very easily turned around and launched a rocket or something right at my house and blown me to smithereens just like that” he said grimacing and snapping his fingers.

Another nervous resident said: “I was walking across the Meadows eating a steak bake from Greggs and I heard this rumbling in the sky like thunder.

“That’s odd I thought. It’s was a lovely sunny day. I looks up and there are two helicopters coming right towards me!

“I thought we were under attack or something. So I dropped my steak bake and ran across the park screaming at people to run for cover!

“I had my mouth full of delicious pastry at the time and it was flying out everywhere. Everything felt like in slow motion.

“It was just like that movie Platoon! I thought I was a goner! I jumped behind a tree but by that time the helicopters had gone off in another direction.

“I was so relieved” he said holding out his still shaking hands.

Another concerned resident said: “I almost fell out of my car when I heard the loud rumbles!

“I ducked behind my car and thought about my family. I was about to call the wife to warn her and realised the thundering noise of the helicopters had stopped. I looked up and they were gone

“I was so relieved. I feel a bit silly now but you never know these days do you!?”

A spokesperson from the Ministry of Defence confirmed that the two aircraft were definitely helicopters.

Were you affected by the thunderous roar of the two potentially heavily armed military helicopters flying overhead close to schools and children’s playgrounds? If so get in touch we would love to here your story!