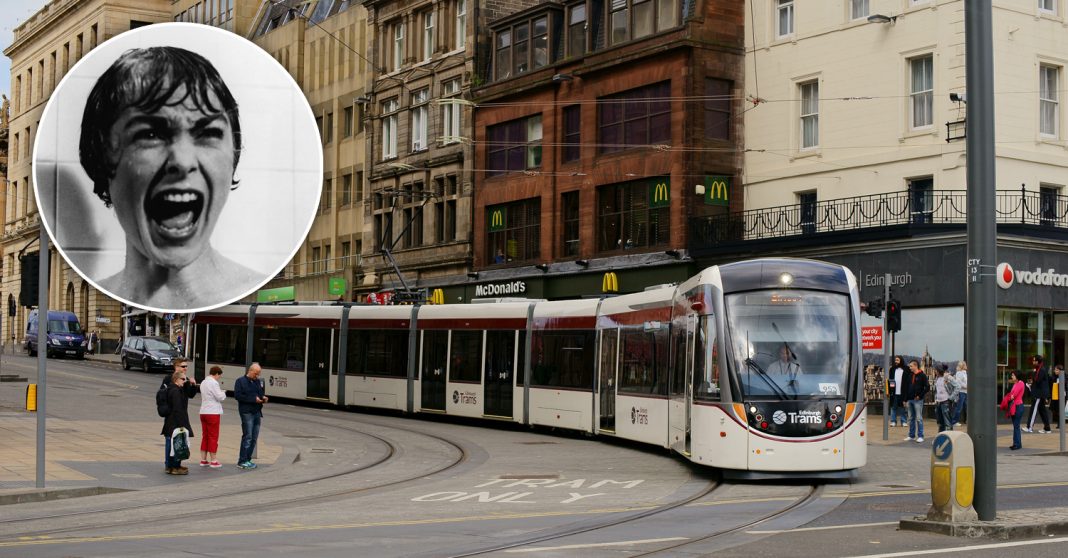 An Edinburgh man was lucky not to have been crushed to death today as he crossed the road at the junction of Princes Street and St Andrew St.

The tram, packed with exhausted tourists coming from the airport, was speeding along Edinburgh’s main street. The tram driver, like a man possessed, was desperately trying to get to his next drop off point at St Andrew Square on time.

The pedestrian, who wishes to remain nameless, was about to cross the road on his way to grab a lunch time McFlurry from nearby McDonald’s when disaster almost struck.

“I was running to Micky D’s [McDonalds] trying to beat the lunchtime rush” said a shaken Mr Peter Pumpernickel who works at The Works on nearby Princes Street.

“I was checking my McFlurry voucher on the back of an old bus ticket to make sure it was still valid. I wasn’t paying attention and was just about to step out on to the road.”

“The next thing you know I hear this distinctive DING DING from an oncoming tram. It was absolutely flying. It must have been going at least 20mph!”

“I just had enough time to step back onto the footpath and wait for it to pass. I could see the anxiety written all over driver’s face and on some of the tourists’ faces who could see what was going on.”

Fortunately for Mr Pumpernickel, and for all the potential witnesses to what could have been an horrific and bloody accident, by the time the tram got to the junction the only thing that had turned red were the traffic lights.

Thankfully the tram driver was fully trained for this type of situation and had just enough time to apply the brakes and bring his streetcar named death to a screeching halt. Mr Pumpernickel was then able to proceed safely across the road.

“A close call by all accounts!” said a very relieved, and very lucky, Mr Pumpernickel.

“If I had been hit by that tram traveling at that speed at the corner of that junction I could easily have been knocked over. I might then have somehow fallen underneath the tram and been crushed to death… or worse!”

We reached out to Edinburgh Trams for a comment on what could have been a nasty fatal incident but wasn’t. As of the time of this article going to print they have yet to get back to us. Maybe they JUST DON’T CARE!!

Were you witness to this near horror show? Or maybe you have you been involved in your own near miss with a tram? Maybe you think these potential death trams should be banned from Princes Street all together? Join the debate. Leave a comment below.