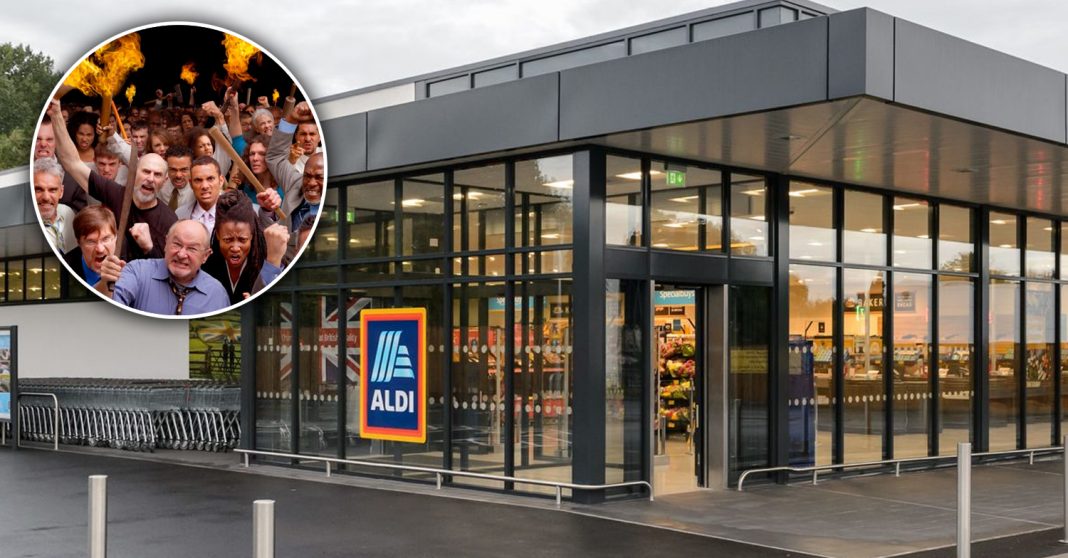 Aldi has recently announced a new meat-free bacon on The Facebook immediately sparking panic, outrage and disbelief amongst their loyal customers, with some calling for the supermarket to shut it’s doors permanently or at least think of renaming the product.

An angry drove of disgruntled customers swarmed within minutes of Aldi announcing it’s new ‘vegan bacon’ on its The Facebook page last week.

The product, which looks nothing like the real thing, is made from pea protein – but infuriated customers weren’t happy about the naming of the plant-based alternative.

The post currently has over ten thousand comments, many of which are from enraged consumers frothing at the mouth with complaints about the name of the meat-free bacon.

One furious The Facebook user wrote: “Could you please consider calling it something else?”

A third critic blasted: “Getting really fucked off with this now. You don’t want to eat the fetid flesh of a dead animal so why the hell would you want to eat a product that resembles it but is made from a much more sustainable source? Absolutely ridiculous!🖕🏻”

“Bacon is bacon which is meat. Peas are peas which are vegetables. This abomination is made of peas. Meat isn’t a vegetable like peas so why are you calling it bacon! Bacon comes from pigs not peas. Pigs are made of meat so surely so is bacon? 🤷‍♂️” exclaimed somebody else flogging their confused point to death.

Another keyboard warrior vented “I’m fucking infuriated and I don’t even eat bacon! 🤬🤯”.

However, not everyone was quite so offended by the new plant based product.

Jester number two quickly followed with “Sounds like all you guys are suffering from a serious bacon addiction. Luckily for you lot it can be cured! 😂😂😂”

We hit the street to see what the Edinburgh public thought of Aldi’s flesh free bacon.

“I envy the people who’s biggest worry in life is what Aldi are calling their fake bacon,” said one bemused Princes Street shopper.

“Fuck off and give my head peace!” said another rather uptight shopper before storming off along George Street.

So there you have it! What do you think? Bacon or not bacon. Pig or pea. What’s it to be? Get involved on the debate. Leave a comment below.