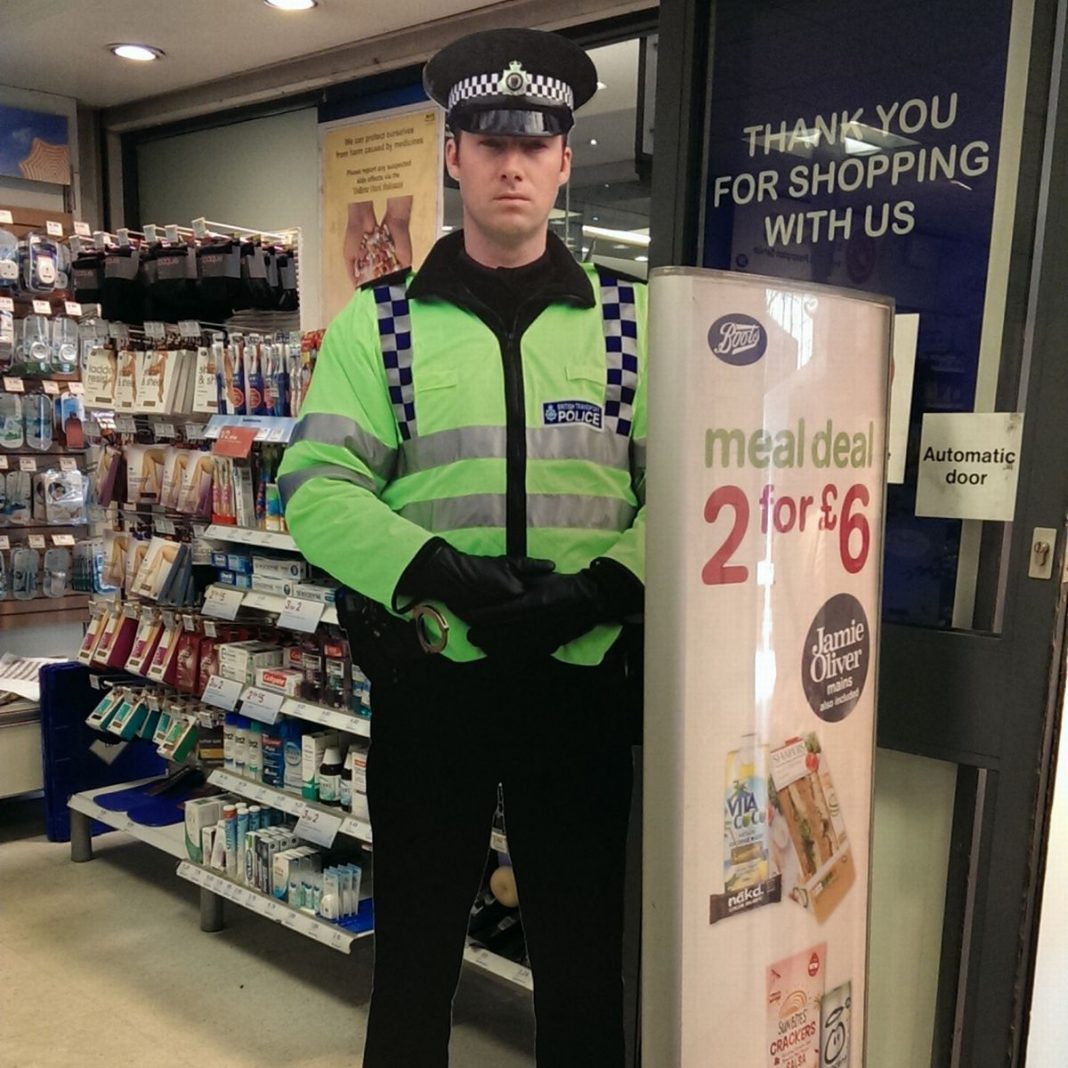 “I stand here day in day out. No holidays. No pay. Not a word of complaint. Doing my duty for my country. What thanks do I get for it? Zero additional feckin days off on top of the zero feckin days we currently get plus a feck all percent of feck all pay rise!! Sweet F A!! Zilcho!”

I ask him to tone it down a little after which he refuses to say another word. Just stands in total silence next to a shelf of reduced price packs of sushi.

I went on to interview another cardboard cop, CPC Andrew Corrigan, a traffic cop stationed in Millerhill next to the community notice board and novelty fire hydrant. He was a bit calmer than his colleague. I tell him about my interview with CPC Brown in Waverley.

“Well it’s easy to see why he is so upset. We are just being ignored by the powers that be again. Always have been. I mean we are just as effective as …” CPC Corrigan pauses to find the right words.

“I’m not sure real cops is the right way of putting it but you know what I mean?” he continues.

I shake my head to indicate I have understood.

“Have you any idea how hard it is to stand here holding this camera like this all day long without so much as a piss break?”

“Wind, rain or shine, sometimes all three at once, we’ll be here, protecting communities just like this one. Look at the state of my trousers for crying out loud! A bird shit on them two days ago! I cannae afford to replace them or take the time to get them cleaned!”

“All the while those… those… real cops drive around in their fancy cars with their fancy minds getting paid a small fortune to sit on hard shoulders in their clean uniforms eating Greggs pastries all day! Well we’ve had enough. Strike action it is!”

“Will anyone notice when you go on strike?” I ask him.

CPC Corrigan pauses again, a small tear appears at the side of his visible eye “Probably not” he eventually replies “Probably not.”

“You wouldn’t wipe that shit off for us before you go would you?” he whispers.

As I clean the shit off his trousers I can’t help but think that we’re all CPC Andrew Corrigan’s in our own little way, standing unnoticed and helpless on a road side somewhere with crap on our trousers hoping someone will come along to clean the mess up for us.

“Goodbye and good luck” I say patting his shoulder as I headed off.

“Aye! Good luck to you too son” CPC Corrigan replies before getting back to protecting Millerhill from potential speedsters.