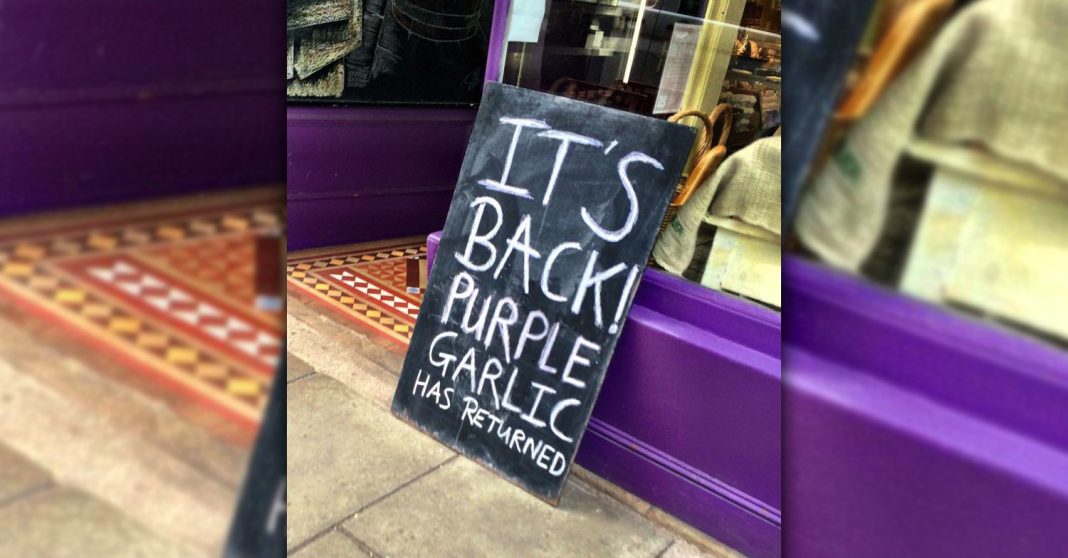 It was touch and go for a few days this week in Stockbridge as local delicatessen ran out of purple garlic.

Tempers were frayed and friendships stretched to the limit as the patience of the locals was tested to the fullest.

We spoke to local man Roger Ruggerbugger about his ordeal.

“I arrived to the shop on Saturday morning and noticed an angry mob outside. One lady was crying and being consoled by a traffic warden. As I got closer I noticed a sign on the window that said ‘Sorry, no purple garlic for the foreseeable‘”

“I could feel the rage surge through my veins instantly. ‘No purple garlic for the foreseeble!‘ I roared at the proprietor waving my cane like this” says RuggerBugger waving his cane at me in a threatening manner.

“He looked to me and must have seen the rage in my face” continues RuggerBugger “Next thing you know he runs indoors and locks the shop door. Coward!”

“I’ve never seen anything quite like it” says Wes Windle proprietor of Stockbridge delicatessen Joop’n Fleece.

“I tried to console the crowd by offering free regular garlic but they started pelting me with them and screaming ‘We can’t eat this shit!‘.”

“They smashed a pane of glass on my door with a bulb of regular garlic for heaven sake! It was ruddy awful! I was afraid for my life!” sobs Windle.

The crowd hung around for some time arguing amongst themselves until Chris Windle was forced to call the police who arrived promptly to disperse the angry mob and collect a bag of free croissants as promised. For an extra couple of free almond croissants they then helped to board up the rest of the windows in case of any follow up attacks.

“I’ve been on the phone for two days trying to source purple garlic so things can get back to normal around here. Thankfully I tracked some down in Fife.”

“I had to pay top dollar for them but whatever it takes at this stage. They’ll never notice anyway. I can charge whatever I feel like for this stuff. The more it costs the more they buy” smirks Windle looking to his shelves of over priced produce.

Were you affected by the shortage or do you know anyone who was? Get in touch. The public needs to hear your story.