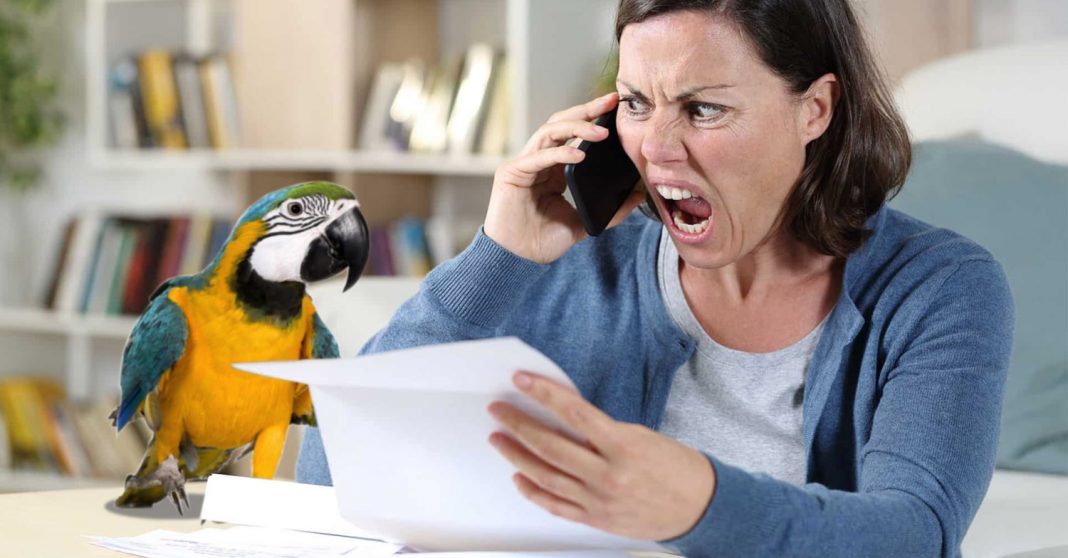 So what’s odd about receiving a council tax bill you might be asking yourself. We all get one, am I right?

That’s exactly what happened to Dalry spinster Bromagh Idrosis, 42, who has described her shock and horror at receiving a bill for her pet parrot ‘Ice Pick Mike’ for £1797.77.

The bill was issued to Mike Idrosis, the parrot, who has Tourette’s Syndrome and spends most of his day shouting obscenities at the TV from his perch in the corner of Miss Idrosis’ living room.

“£1797.77 would buy a lot of Mike’ favourite food. He has expensive tastes and only eats passion fruits. So this money could but 4315 of them to be precise.”

“He is very passionate” says Miss Idrosis as she adoringly gazes up at Ice Pick Mike.

“I’ll sleep with you for five bucks an hour you dirty old bastard!” shrieks Ice Pick Mike from his perch.

“It’s ok, I understand” I say trying to reassure Miss Idrosis who is clearly very embarrassed.

“I thought you were only 30. Don’t pay any attention to anything he says though” she replies as reassuringly as she can.

“Are you a dom or a sub? Would you take it up the ass!” screams Ice Pick Mike.

We sit in silence for a few minutes in the hope that Ice Pick Mike settles down.

“Anyway about this bill. So it must have given you quite the shock” I ask.

“It certainly did. I began to worry about how I was going to get the money to pay it. I’ve tried phoning the council but all I get is this maze of ‘press number one’ then ‘press number two’ then ‘press one’ again and round and round it goes. It’s impossible to get to speak to a human being any more” laments Miss Idrosis.

“My friend is in her 70’s and has a heart condition and high blood pressure and vertigo and she also owns a parrot. It’s lucky they didn’t send this bill to her, she might have keeled over!” says Miss Idrosis.

“I’m going to wank the dick on my head!

“How much money do you make?” shrieks Ice Pick Mike.

We try to ignore him and continue our conversation.

“This is clearly an obvious mistake on Edinburgh Council’s part Miss Idrosis. I’ll call them now and see what’s going on” I say trying to put her mind to rest.

I call a personal contact in Edinburgh Council who has asked to remain anonymous. I get through straight away to her secretary.

“Hi there, can I speak with Mrs Maddy Cash, head of accounts please?” I ask.

I get straight through and as we start to discuss Miss Idrosis’ case with Mrs Cash, Ice Pick Mike flies over.

“Press one for butt fun! Press two to poke the poo!” he yelps straight into my phone.

“Who was that!?” asks a rather surprised Mrs Cash.

I spend the next ten minutes trying to explain that Edinburgh Council had mistakenly sent a tax bill to Miss Idrosis’ parrot who just happens to have Tourettes’ Syndrome and that it was he who was responsible for the crude comments. After the way our last phone call went I’m not sure she believes me.

After some to-ing and fro-ing we finally get the bill cancelled much to the delight of Miss Bromagh Idrosis and her pet parrot Ice Pick Mike.

Before I go I ask Miss Idrosis why she calls her parrot Ice Pick Mike.

“I love Steve McQueen you see and Ice Pick Mike is my fav tune from the soundtrack of one of his best movies, Bullit” she replies almost swooning.

And with that we decide to call it a day. A very very strange day indeed.

An Edinburgh Council spokesman said: “We have systems to try ensure these errors are not made so I’m at a loss to say why this happened. We offer our apologies and a free day pass to Edinburgh Zoo for both Miss Idrosis and her pet parrot.”

Have you ever been sent a bill in error? Have you got or know anyone who owns a mad pet? Get in touch. We’d love to hear from you. Comment below 🙂