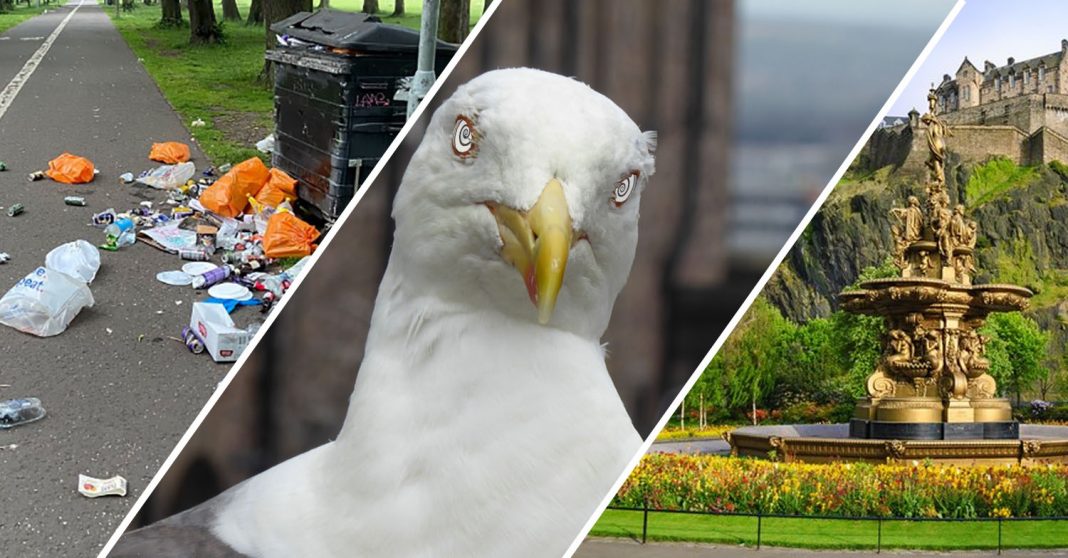 Top secret plans revealing how Edinburgh Council set up a crack team in partnership with two ex CIA agents to train seagulls to clear up the city’s rubbish have been leaked to our head office.

The heavily redacted papers reveal how a top secret department called E██ █e██ J███it ███z has been set up in the basement of the Old Royal High School building near Calton Hill in the city.

The crack team is made up of two senior Edinburgh councilors, Barry Bonaparte and Bella Belcher and two members of the original CIA team involved in the controversial human mind control program MKUltra, which was officially closed down in 1973.

The crack team have been working very closely with a select group of Edinburgh University’s finest psychologists and veterinarians. Their research has been fully funded, at great expense to the public purse, by Edinburgh Council.

We tried for two weeks to get in touch with members of the crack team but with no success. Then out of the blue we receive a call to our offices from Barry Bonaparte.

“So what is it exactly that your team is working on?” I ask Bonaparte after exchanging some pleasantries.

“Well the concept is quite simple really. The city of Edinburgh has a massive rubbish problem. Edinburgh Council’s Waste & Environmental Services Department are totally out of their depth when dealing with the issue. They are a great bunch of talkers but when it comes to action you’d be hard pushed to find a more useless circus of clowns.”

“The city also has a massive seagull problem. Attacking visitors as they quietly eat their fish & chips and ice cream. The noisy feckers are everywhere and the tourists hate them. And unhappy tourists don’t spend as much as happy ones.”

“But, and this is the important bit, seagulls love rubbish! They can’t get enough of the stuff. So myself and Bella came up with the idea of training seagulls to lift the rubbish and drop it off at nearby landfills.”

“They would then receive a reward. Like a dog biscuit or something but for seagulls. Then at the end of their working day they would fly off to a specially built seagull shelter in Seafield. We are thinking of calling it the Seafield Seagull Shelter. Try saying that after a few beers!” he giggles.

“Of course all this hinges on being able to domesticate the seagulls. Once domesticated we would then be able to train them up. That’s where Lou Kinto and Mah Ayes come in. They spent years working on the CIA’s MKUltra program back in the 60s and 70s.”

“We got in touch with them via their website www.domestication-station.com where they claim to be able to domesticate and train anything, even early morning Ryanair passengers on a weekend flight from Belfast to Alicante.”

“I know! Wild claim right! But they reckon they could do it” replied Bonaparte

“They are amazing to watch though. Two professionals on top of their game and very hands on and not afraid to get them dirty. Their hands I mean.” explains Bonaparte.

“So how does one go about domesticating seagulls” I ask Bonaparte.

“Well, that’s a very good question and one we have spent a lot of time discussing. After much debate Lou Kinto and Mah Ayes came up with what they call the ‘If you can’t beat em join em‘ approach. Seagulls are a protected species so beating them was out of the question so join them it was.”

“Next day Lou Kinto and Mah Ayes show up for work dressed as seagulls. After spending a few hours practicing some body language technique and gull whispering off they went out into the field to start domesticating. They started off on Leith Docks as they felt that the gulls would be more relaxed next to the sea.”

“It’s been a slow process and has come with it’s own risks I’m afraid. Lou Kinto has had to get stitches to a face wound after getting into a fight with a feisty gull over the remains of a Greggs steak bake. Another gull has tried to ride Mah Ayes on top of a bin near the Leith Citadel but after a brief struggle he regained dominance. But all in all they are making great progress and appear to have been accepted into the Leith Docks colony.”

“It’s a very slow process but we are in it for the long haul and it will all be worth it in the end. Edinburgh will very soon have colonies of silent domesticated seagulls clearing our streets of rubbish. The council can then rid itself of their useless Waste & Environmental Services Department and the tourists will be spend spend spending and business owners will be delighted. It’s a win win win! How cool will that be!?” says Bonaparte rubbing his hands together.

He pauses for a few seconds. He looks a little confused.

“What about them?” he replies.

So what do you think about your money being spent on domesticating and training seagulls to clear rubbish from Edinburgh’s dirty streets? Have your say. Join the debate. Leave a comment.