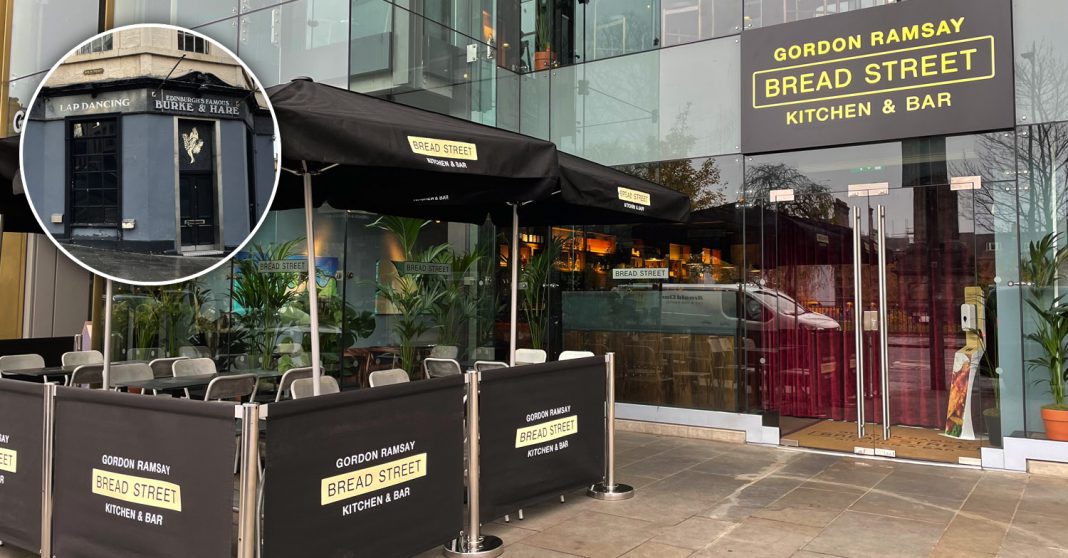 But the restaurant’s name has confused a majority of Edinburgh locals.

We took to the streets to ask the public where they would expect to find Gordon Ramsay’s new restaurant.

Our question was a simple one.

“Where would you expect to find Gordon Ramsay’s new restaurant Bread Street Kitchen?”

We asked 100 people in total and 86 of them said Bread Street near the city’s infamous Pubic Triangle. Oddly enough the remaining 15 said they thought it was a popular 90s band from Texas.

“That’s an easy one” replied one 85 year old gentleman “Bread Street is next to all those titty bars.”

“That’s where that Pubic Triangle is, is it not?” replied his friend “I’ve never been but I hear it’s good fun up there. I’m past all that now at my age. My tackle is long out of action.

“My balls droop to my knees and I doubt my tackle would budge even if I took a handful of that minagra or what ever it’s called.”

Another member of the public quipped “If I went to Bread Street I wouldn’t be eating out of a restaurant that’s for sure.

“I’d be eating out of something entirely different if you know what I’m saying! I wouldn’t be telling the wife aboot it either. You know what I mean?

“Don’t be putting my name on that. I don’t want to get into any bother!” said Joe Mackie from Cheyne Street in Stockbridge.

Their spokesperson got back stating that Gordon Ramsay, who once made a sandwich for Justin Bieber, was f[BLEEP]ing furious at the cock up [no pun intended].

He said Gordon loved tits as much as the next [heterosexual] man and had nothing against titty bars.

But he did not want his shiny new restaurant’s name to be associated with them in an way.

It is rumoured that Gordon has set up a GoFundMe page to raise the money in order to buy Bread Street and change it’s name to Sesame Street.

Sesame Street is Gordon Ramsay’s favourite TV show. He even has a tattoo of his favourite character from the show, Big Bird, on his left shoulder.

It is also widely believed that he has another of Oscar on his right butt cheek.

He has brushed this off as utter rubbish.

So have you been to Bread Street Kitchen yet? Did you end up in a titty bar in the Pubic Triangle by mistake? We’d love to hear from you.

Share
Facebook
Twitter
Pinterest
WhatsApp
Previous articleIs there anything more Xmassy than drinking in a garden shed next to a building site?
Next articleTK Maxx shopper shocked at saucy display stating shop should be renamed TK Sexx
- Advertisement -