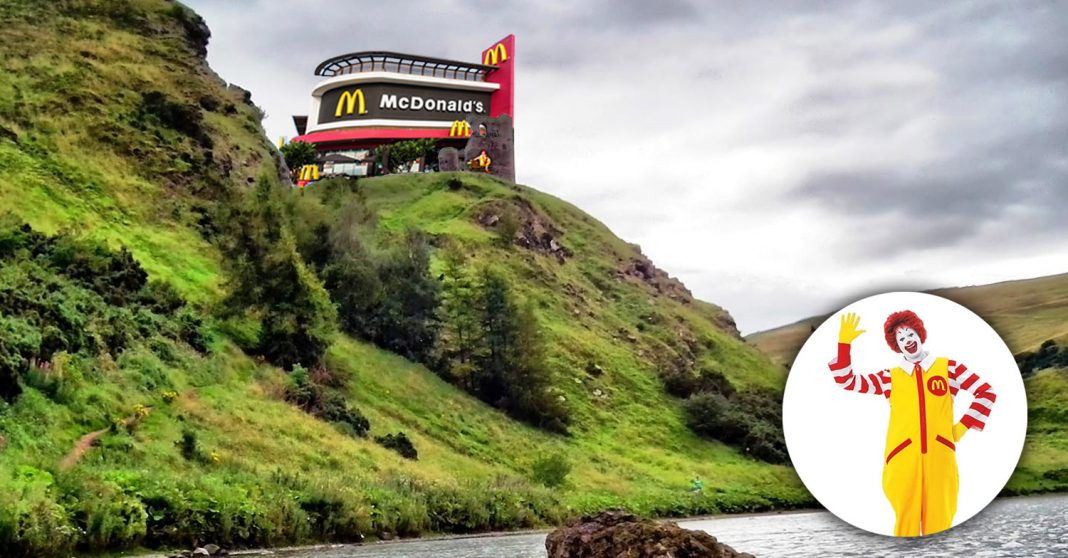 McDonald’s have recently submitted plans to open a new restaurant on the site of the ruins of St. Anthony’s Chapel on the hill above St. Margaret’s Loch in Holyrood Park.

A spokesperson for the restaurant made an announcement from the site today stating that there is no better place in the world to chow down on a big mac and fries.

“Hands up who doesn’t love the idea getting tucked into a Double Big Mac™ with fries and Strawberry McMilkshake™ and Malteser McFlurry™ and a coffee from the McCafe™ after a good walk up McArthurs Seat [trademark applied for]?”

Much to his surprise we all looked to each other in horror then slowly raised our hands.

We asked if he had any concerns about the proposed building destroying the aesthetics of an area of natural beauty as well as introducing serious issues such as rubbish and heart attacks to this famous tourist attraction.

“You are right in that this is such a place of natural beauty and we feel that the Golden Arches™ will only add to that.

“We will be incorporating the current ruins into the new build and putting some fake trees out front.

We will also put a full size plastic Ronald McDonald on a bench so our patrons can pose with him for selfies with McArthurs Seat [trademark applied for] in the background. Hashtag McArthurs Seat! Beautiful. Right? What’s not to love?

“And yes before you get your McKnickers™ in a knot, you did hear me correctly. We have proposed a very slight name change from Arthur’s Seat to McArthur’s Seat. Very slight. You’ll hardly even notice.

“In return we will donate over £100 a month to local heart health charities who will invest the money in finding a cure for the heart disease caused from eating too much fast food.

“Once they find that cure we have already licenses in place so we can use that cure to open our very own McClog & McClear Artery Service™.

In the meantime we will continue to sponsor local sporting events. We’re the good guys here. So c’mon where’s the love!?

“As for the rubbish issue we have added to our plans proposals for a Golden McSkip™ to be placed every 100 metres from Holyrood Park right to the top of McArthur’s Seat [trademark applied for] that will be emptied by McVolunteers™.

“The skips will glow in the dark and have little solar powered flashing beacons on them so people won’t get lost up there in the dark.

“The solar panels may also provide enough power to run a few McVending Machines™ along the way. But lets not get too ahead of ourselves. That’s for another day. McPlan 2.0™ if you will.”

“You don’t think that your proposals are ridiculous and have little to no chance of being passed? It’s a lost cause surely?” we asked him.

“We’ve made some really big donati… Sorry, we’ve had some really big productive McMeatings™, that’s with an a, with Edinburgh Council and believe our plans will get the go ahead.

“Plus we’ve been saying a few McPrayers™ to St Anthony, who is after all the patron saint of lost causes so we think we are in safe hands.”

“Oh! I forgot to mention jobs. This will create six full time jobs over the next 12 months. They’ll all work 90hrs a week and we will contribute an additional 49pence an hour to their fully government funded basic living wage. Thank y’all for coming today.

He finished the interview handing out McVouchers and McKeyrings. I got one for £10 worth of free McFries™ and 3 free McLattes™! Result!

So what do you think? A very bad McJoke or something you would like to see on your next walk up McArthur’s Seat?