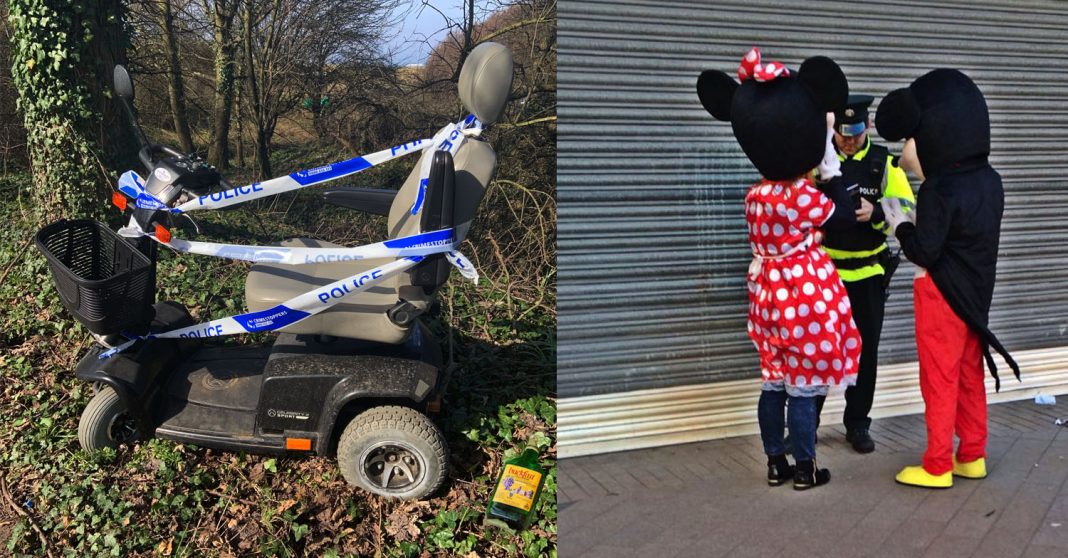 Imagine PC Wylie Rush’s surprise as he sat in his patrol car on Waterloo Place enjoying his fresh pastries and coffee when Mickey & Minnie Mouse speed out of the junction of North Bridge and Princes Street on a mobility scooter.

“I was sitting tucking into my almond croissant from Many Shapes Bakery. Fresh out of the oven. Have you tried them?” asks PC Rush.

“I have not, but I will definitely try them out next time I’m passing” I answer.

“Make sure you do. They are delicious, best in the town. Tell them PC Wylie Rush sent you.” says PC Rush

“Well, anyway I was tucking into my early breakfast. It was 4:30am. It had been a quiet night up to that point. I was sipping my coffee when I heard someone yell ‘YEEHAA!’. I looked up in time to catch Mickey & Minne Mouse swerve around the corner of North Bridge and Princes Street on a mobility scooter.”

“I’ve seen some sights in my time sir but nothing quite like this! Mickey Mouse was driving and Minnie Mouse was standing behind him clutching a bottle of Buckfast and screaming Yeeha! at the top of her voice” continues a stunned looking PC Rush.

“I took a few seconds to make sure I wasn’t hallucinating then I put my unfinished almond croissant in the glove compartment and fired up my siren and gave pursuit.”

“The two mice saw me coming and panicked and steered their scooter into Princes Street Gardens before abandoning it behind a tree and running off along St David Street before turning onto Rose Street.”

“As luck would have it my partner PC Briny Balls was visiting one of the saunas in Rose Street at the time. You’ll leave that bit out won’t you? I don’t want to get him into any trouble with his wife or the big boss man” pleads PC Rush.

“Consider it done!” I reassure him as I make a dramatic scoring out motion on my note book.

“Thanks man. Well anyway, I get on the radio and tell PC Balls the situation. He got his kit back on and jumped into action apprehending the suspects out the back of Jenners on Rose Street”

“They were both pretty drunk. Turns out they had been invited to Edinburgh by Shudder Belly CEO Sylvester Fox, who has been very proactive in promoting the Disneyfication of Edinburgh city centre, to speak at a marketing conference. Mickey & Minnie had a few too many and had ‘borrowed’ one of the attendee’s mobility scooter” says PC Rush.

“I told Mickey that the situation reminded me of one of my favourite Disney cartoons as a kid call ‘Traffic Troubles’ where Mickey Mouse gets into trouble with a cop for his terrible driving.”

“Oh how we laughed.”

“Anyways, we decided that the appropriate action was to issue a spot fine and three penalty points on Mickey Mouse’s driving license. They didn’t have enough money to cover the fine so we agreed that a couple of selfies each would cover it.”

“Then we dropped them off back at the conference and told them to behave themselves for the rest of their visit or I’d get Peg-Leg Pete for them” laughs PC Wylie Rush.

“The owner of the mobility scooter has been reunited with his chariot” says PC Rush.