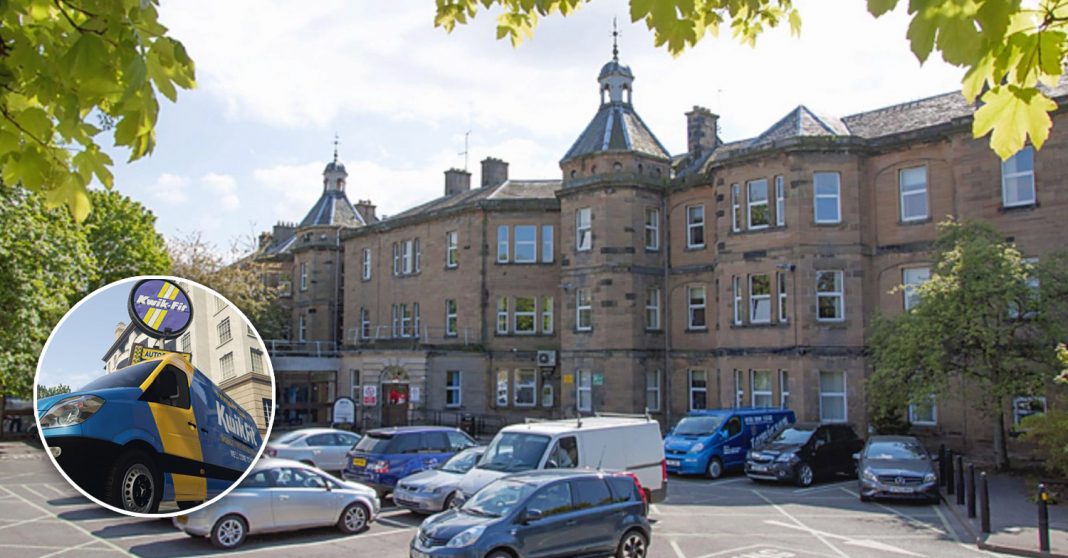 A Morningside resident has been taken to hospital in the back of a Kwikfit van and treated for shock after her neighbour of ten years said hello to her whilst passing on the shared stairwell of their tenement block.

Marjorie Mullet, who has lived in Edinburgh’s Morningside area for most of her adult life, was taken to nearby Royal Edinburgh Hospital after her neighbour’s cry for help around 2:30pm on Tuesday afternoon.

“I just said hello to her as we passed on the stair.” said neighbour Felicity Wicity “Marjorie just kind of slumped up against the wall, whimpered a little then slid to the floor.”

“She started to shiver and I think a little bit of wee came out. You’ll leave that bit out won’t you son?”

“Of course” I said “We wouldn’t want to embarrass her any more than we need to would we?”

“Thanks son. Anyway so I called for an ambulance. They said that it would take at least an hour to get here so I ran across the road to Kwikfit to see if they could help.”

“We was just fixing a slow puncture on JR Gowan’s fish van when this lady ran across the road screaming that her neighbour had collapsed on the stairs and needed taken to a hospital” said Kwikfit fitter Fitz Fisher.

“We thought it was a joke at first but JR kindly ran over and sure enough there she was shaking on the floor in a little pool of her own piss.”

“So we gets the work van, bunged her in the back and took her to the Royal Ed[inburgh]. I know it’s a psychiatric hospital but it’s the closest hospital to us and we had to get back to get the puncture fixed before 4:00pm”

We asked Ms Mullet if she had any recollection of the event.

“I was on my way to do the lotto and put on my day’s bets at the bookies. I was walking down the stair of my tenement checking my slips and I saw Mrs Wicity coming up.”

“We have never spoke in all the time I’ve lived here. You know what Edinburgh folk are like. They like to keep themselves to themselves” said Marjorie Mullet.

“As we got closer I moved to let her pass and she looked up and said ‘Hi Marjorie, how are you?’. I remember feeling a little light headed and I saw a bright light appear before me.”

“Next thing I know I’m being lifted out of the back of a Kwikfit van, by someone who smelt like a fishmonger and a Kwikfit mechanic, outside a psychiatric hospital!”

“It was quite a shock I can tell you. A kind doctor was waiting at the door and she helped me into a darkened room and spoke really gently to me. She gave me a paper bag to breath in and out of and a couple of pills to settle my nerves.”

“After a while I began to feel much better. I’d wet myself so she got me a pair of a dead patient’s pyjamas. They were a few sizes too big but they did the job.”

“They let me go a couple of hours later but I had to walk home in my Royal Edinburgh Hospital pyjamas. I got some odd looks on the way I can tell you! I felt like Chief Bromden, that big Indian chap who escaped from hospital in One Flew Over the Cuckoo’s Nest” said Ms Mullet.

“It just goes to show you the power a few little words can have.” said Dr Amie Knutz, chief psychiatrist at the Royal Edinburgh Hospital. “A simple hello out of the blue can be enough to put the best of us over the edge.”

“I’d call on all Edinburgh residents to be very careful when tempted to be cordial to a neighbour or anyone for that matter. Best keep the head down and avoid eye and verbal contact at all times.”

“Even if you know the person sometimes it’s best to cross the street and pretend not to have seen them. Just to be on the safe side” advised Dr Knutz.

Have you said hello to anyone in Edinburgh recently? Or has anyone said hello to you while out and about in the city? What was their reaction? We’d love to hear from you. Get involved. Leave a comment.