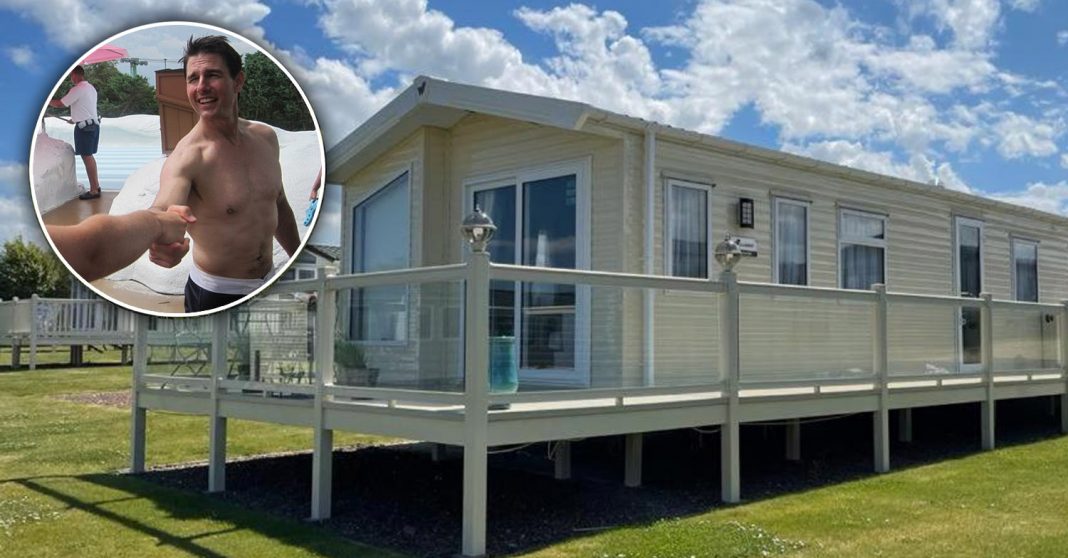 High heel wearing Hollywood legend Tom Cruise has decided to fork out a small fortune on a new luxury home. But the plush property is not in the Berkeley Hills in California, nor is the magnificent mansion in London’s expensive Park Lane (according to our Monopoly board). It’s in Seton Sands!

Tom fell in love with the place after recently floating by on his luxury yacht which was spotted in various locations off the Scottish coast over the summer.

The little guy with the deep pockets is really showing the colour of his money and splashing out over £600 a week on a lovely spacious 3 bedroom holiday home right in the heart of the Seton Sands holiday park.

Due to the ongoing issue of Covid 19 we believe that Tom is being asked to supply his own bedding. The holiday home owners have sent their apologies for this and promise to leave an extra chocolate on his pillow for when he arrives.

Double sofa beds in the lounge area mean that there will be plenty of room for Tom and up to seven of the petite play-actor’s entourage . The sofa beds can be pushed together to form comfy double beds should there be nothing on the telly.

As a guest at Seton Sands Tom and his crew will have full access to all facilities which include crazy golf, archery, outdoor swing parks (those sofa beds should come in handy after all 😉)

There’s also a nightly disco where Tom can pull all the right moves before belting out some of his fav pop tunes at karaoke and cocktails in the Showbar next door.

In the highly unlikely event of the winter sun coming out and tiny Tom fancies taking full advantage of the East Lothian weather he can don his budgie smugglers and hit the nearby beach or just strut his stuff around one of the two, yes two!, swimming pools.

The pools even have water slides so Tom, who often does his own stunts in his movies, can impress the other holidaymakers with some of his neat tricks.

But should it rain man or if there are days of thunder, he can always nip into the amusements and while away the hours on the tuppenny sliders or on any of the vast array of one arm bandits on display.

It’s risky business but in the unlikely event of the multi millionaire running out of cash he can always get a few quid on tick and use his fancy boat parked off shore as collateral.

The holiday park is owned and run by the Maguire family. We spoke with the mummy Mrs Jerry Maguire said “We can’t say exactly when Tom and his crew will be arriving. The dates aren’t set in stone as yet, or should I say Seton Sands”

“The good news for anyone hoping to catch a glimpse of the usually elusive pocket sized mega star is that autumn and winter in Seton Sands are usually very quiet so we have plenty of other holiday homes for rent. Just check out our website. Book early though to avoid disappointment.

“All what we got here’s American made. It’s a little bit cheesy, but it’s nicely displayed. We think that’s why Tom has chosen to stay with us.

“We expect he’ll be visited by loads of his other show biz friends such as Proclaimers brothers Charlie and Craig Reid and Slade lead singer Noddy Holder to name but a few.”

However, a spokesperson for Mr Cruise has poured cold water on Mrs Maguire’s claims. “Tom has absolutely no intention of spending any time on Seton Sands holiday park this winter. To suggest otherwise is just ridiculous. Mrs Maguire is clearly losin it”

But Mrs Maguire was quite adamant “Tom made it very clear that his visit was to be top secret and only a few good men would know anything about it. His spokesperson is clearly one of the outsiders.

“And don’t forget, book early to avoid disappointment and missing out on seeing Tom this winter. People will be coming from far and away to see him. They’ll be like midges round a fresh turd!”