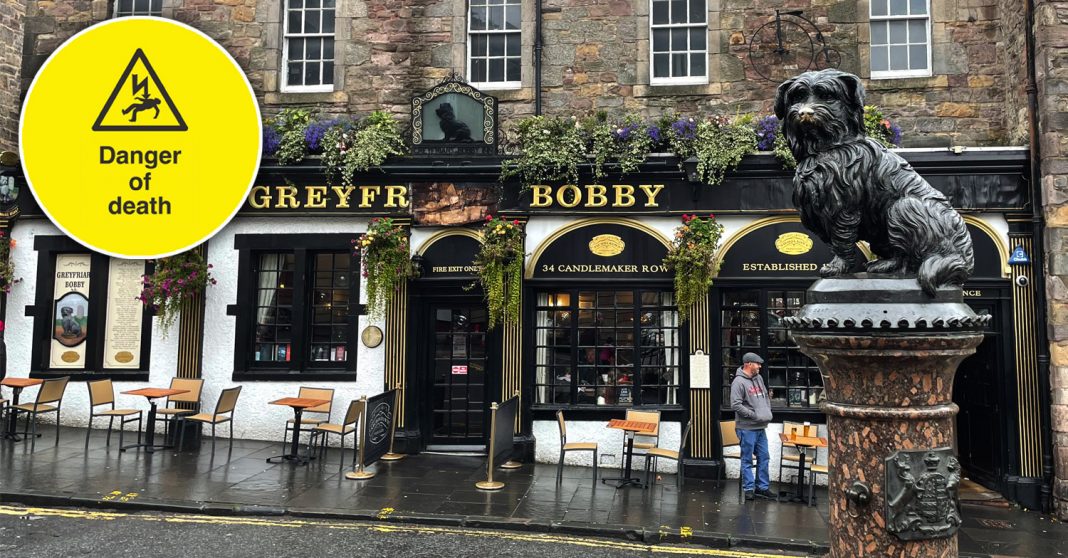 Edinburgh council have unveiled plans to electrify Greyfriars Bobby in a bid to stop tourists from rubbing his nose for good luck.

A spokesperson for the council told us “We are sick and tired of having to respray Bobby’s nose two or three times a year just because some feckin eejit tourists think it’s meant to bring good luck if you rub it.

“I mean have you ever heard anything as fucking ridiculous in your life!?

“We get that it makes for a funny photo to post on The Gram [Instagram] or The Facebook but for Christ sake just stand beside him and smile with your two thumbs up or something. There’s no need to go rubbing his nose. He’s doesn’t have a genie inside him. He’s not a magic lamp!

“We plan to electrify the statue so if anyone touches him they’ll get a nasty shock. Nothing too painful or life threatening but enough to get the ‘fucking stop that’ message across. A bit like an electric fence around a field of cattle. Although cow’s have a bit more sense than some of these half wits to be honest!

“They do the same with the statue of Hume on High Street. They rub his fucking toe. Can you believe that!? I mean who the fuck are these people. How will rubbing Hume’s toe bring you good luck!?”

We couldn’t give him a definitive answer.

“So we plan to see how it goes with Greyfriars Bobby first then we will most likely have to electrify the Hume statue as well” continued the council spokesperson.

We put a shout out on The Twitter to see if we could find anyone who’s luck had changed for the better as a result of rubbing Greyfriar’s Boaby or Hume’s big toe.

We got a response for @minitheminx1299548747,who lives in London saying “I touched Greyfriar’s Boaby on the Saturday morning and that evening I got three numbers up on the lotto, winning £30. I’ve never won anything before. So yeah if I’m ever back in Edinburgh I’ll definitely be rubbing plenty more of the Boaby.”

We got another reply from @spoofylaroux123, who is from Paris, saying “I sucked Hume’s big toe on the Friday night on way home from the pub. Got really sick on the Saturday morning. Hospitalized on the Saturday evening. I shat and puked my brains out right through the night. But according to doctors I made a miraculous recovery and got discharged on Sunday evening. I was very lucky indeed.”

We let the council spokesperson see the replies we had received.

“It’s all a fucking nonsense. I mean what the actual fuck!?

“Einstein was bang on when he said ‘Two things are infinite: the universe and human stupidity; and I’m not sure about the universe’

“Next thing you know they’ll be down in Princes Street Gardens rubbing that bear’s nose for luck” he said shaking his head in disbelief.

We waited for a few moments before we broke the news to him at which point he fell to the ground sobbing and slobbering all over the footpath.

In the end we had to call for medical assistance who arrived promptly (hashtag NHS Heroes), sedated him and took him away to hospital in the back of an ambulance.

The good news is he’s now out of sedation and making a full recovery at home surrounded by his family and friends and his two cats Tiffany Chinstraps and Triple Cooked Chips.