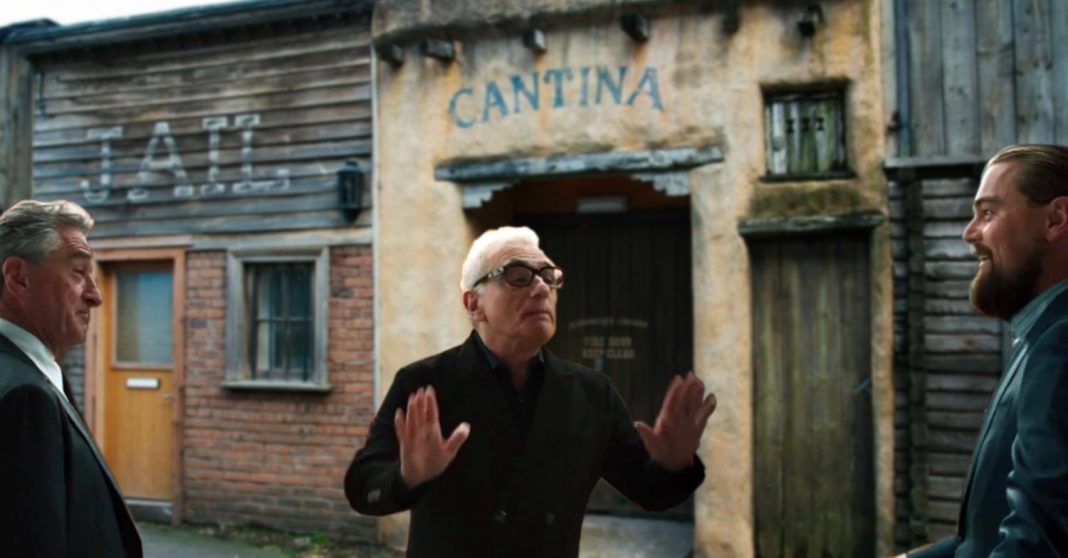 One of the world’s most famous directors, Martin Scorsese and equally as famous Hollywood actors Leonardo DiCaprio and Robert DeNiro have been spotted in Morningside’s Wild West Street.

Photo’s have been flooding social media platform The Twitter as surprised onlookers gathered round to watch the famous quartet wondering around taking notes and plenty of photos on their fancy phones.

It is thought they were scoping out possible locations for Scorsese’s first attempt at directing a western.

This urban Wild West town is one of Edinburgh’s many hidden gems and is tucked away in the heart of Morningside, just off Springvalley Gardens and would make a perfect location for a Scorsese blockbuster.

By coincidence it is not far from Cafe [De]Nero on Morningside Road. We are not sure if the duo enjoyed an espresso or two there. Unconfirmed reports suggest not.

We contacted Hollywood to see if there was any truth in the rumours of Scorsese’ first western movie being shot in Edinburgh. We have yet to hear back from anyone.

We did however manage to track down Scorsese’s camera assistant Eyam Yermann who is also DeNiro’s occasional stunt double.

He initially turned down our request for a comment but later changed his mind when we offered him four crisp £5 notes and a voucher for two free coffees from Cafe [De]Nero.

“Yes, there is talk of Scorsese shooting a western in Edinburgh as long as the location is right. And from what I hear he was very very impressed by what he saw at Wild West Street on Morningside.” said Yermann

“He said it was like he had gone back in time and was walking through the main street of Dodge City!”

We spoke to one local resident who got caught up in the kerfuffle on her way home from the shops.

“I was just making my way back from Marks & Sparks [Spencers] with my bag of yellow stickered croissants and I see a crowd causing quite the commotion on Springvalley Gardens.” says Morningside resident Anastasia Lovehandel-Dampfnudel.

“Of course I had to check it out so see what was happening. Next thing you know I’m standing outside the cantina beside Leonardo DiCaprio who was cracking a joke about the size of Robert DeNiro’s nose. Right into Robert’s face!”

“The crowd was loving it but Robert was furious and Martin Scorsese was trying to calm things down. I managed to grab a shot of the moment on my iPhone. It was all quite surreal really.”

Some photos that have appeared on The Twitter suggest that the quintet are staying in an Airbnb just round the corner at number 57 Morningside Park.

We called at the door to confirm but there was nobody in at the time. However, there was a note for the milkman requesting two pints of full fat and one pint of almond milk. It is widely known that DeCaprio is a very vocal vegan.

Have you seen the trio whilst out and about in the city? If so we would love to here from you. Comment below or send us a tweet on The Twitter or an Instagram using the hashtag #heresaphotoofdenirodicaprioandscorseseoutandaboutinedinburgh