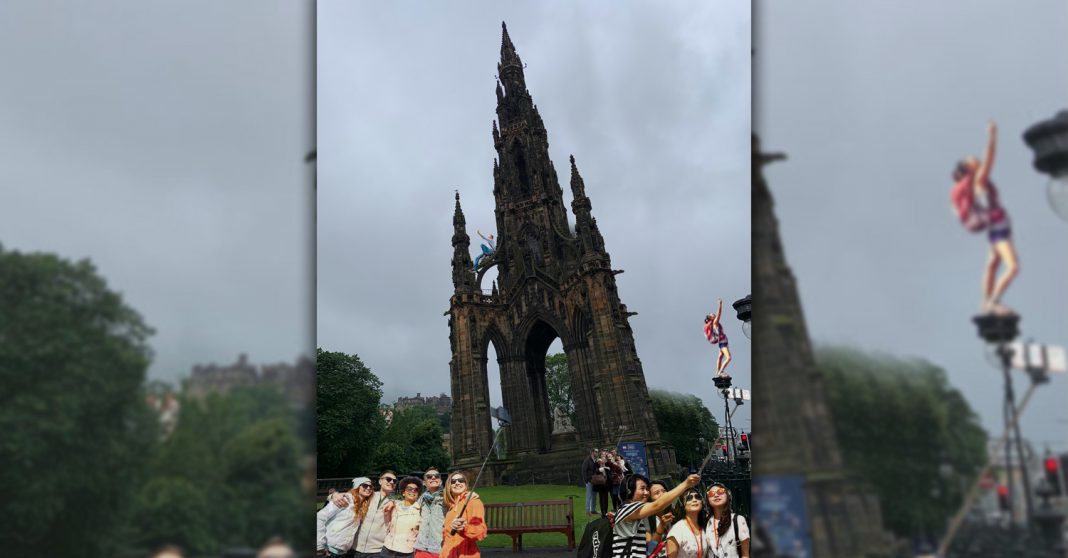 Shudder Belly’s relentless Disneyfication of Edinburgh has literally sank to all new levels with their latest proposal.

Shudder Belly CEO Sylvester Fox submitted plans to Edinburgh Council which included a proposal to rename the iconic Scott Monument on Princes Street to the Tower of Edinburgh and then have a specialist team of engineers introduce a slight lean much like the Leaning Tower of Pisa.

We caught up with Sylvester at a not so secret brunch he was holding for some of Edinburgh Council’s key decision makers in the Balimmoral Hotel.

“Well, I’ve just got back from a road trip around Italy that included a stop over in Pisa. Of course while in Rome and all that I visited the Leaning Tower of Pisa.”

“We’ve recently been thinking of how to best capitalise on the upcoming 250th birthday of Sir Walter Scott.”

“As I watched the crowds queuing to take those silly selfies. You know the ones where they pretend to be holding the tower up or pushing it back up straight I had the idea to do something similar with the Scott Monument.”

“Did you know that the Tower of Pisa attracts 5 million visitors each year raking in about 21 million Euro every year?” asks Fox.

“We thought we were milking Edinburgh for all it’s worth over the last ten years but apparently not. Here we have another opportunity to squeeze a few more drops of profit from the tit of the Edinburgh cash cow” says Fox excitedly rubbing his hands together.

“That’s off the record of course, right!?” he asks pointing at my notebook.

“Of course Mr Fox, I couldn’t possibly print that” I reply pretending to scribble some sentences out on my note book.

He reaches over and puts a couple of crisp £20 notes in my shirt pocket.

“Please call me Sly and there’s plenty more where that came from” he says to me as he pats my shoulder and winks at me.

“So do you think your plans will get the go ahead?” I ask Sly.

Sly quickly looks around him then leans in and whispers “Well any council that gives us the go ahead to demand that Edinburgh residents wear wristbands so they can get in and out of their own homes during Hogmanay will have absolutely no issues with this.”

He opens his jacket to reveal a number of thick brown envelopes each individually named, he closes his jacket before I get the chance to read the names. He taps the side of his nose and winks.

“You know what I’m saying?” he continues.

Unfortunately we the residents of this great city know only too well what he’s saying.

“But what do you think Edinburgh residents will think of your plans? Haven’t you caused enough disruption to their city over the years?” I ask him.

“To quote Edinburgh artist Richard Demarco ‘The Scots think of it as their capital; they’re too possessive, Edinburgh belongs to the world.’ It’s all mine!!” he smirks stroking an invisible cat he’s holding on his forearm before vanishing back through the doors of the hotel.

As I walk back along Princes Street the Scott Monument comes into view. Majestic and upright. Amongst its pillars Sir Walter Scott sits pensive as always. I think about Fox dishing out his brown envelopes over cocktails. A famous Scott quote comes to mind.

“O, what a tangled web we weave when first we practice to deceive!“

Long runs fox, Sly, but you will be caught at last.