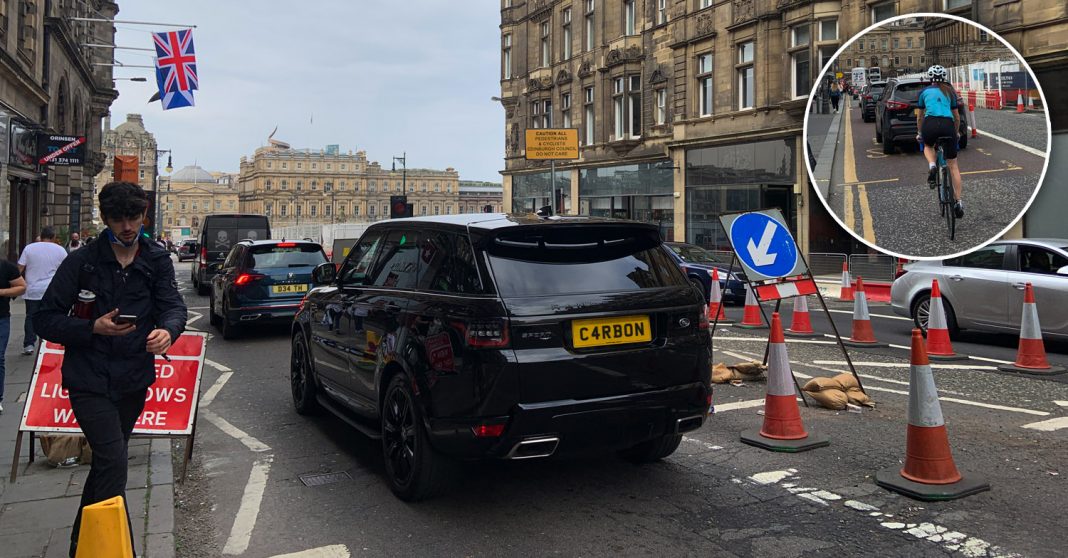 Edinburgh Council has announced that it will start removing Spaces for People measures in the city, including the removal of segregated cycle lanes. They claim that the removal of the measures are in keeping with it’s pledge to achieve carbon neutrality sometime in the future. Hopefully. Fingers Crossed.

“Achieving carbon neutral status in Edinburgh is no mean feat and it’s going to involve a Herculean effort by public bodies and partners right across the city. The scale of the challenge is huge, but what our work to date has shown is that this is achievable.”

“We’ve identified that the removal of bicycle lanes and reduction in the size of footpaths and parks and increasing road traffic everywhere we possibly can will help to reduce our carbon impact.” says straight faced Edinburgh council leader Adam McVey clambering out of his new gas guzzling yellow and black Porsche Boxster.

“We’ve heard this all before have we not?” I ask him.

“You may have done, because that is the truth and I only speak the truth” he said without a hint of a smile.

“You don’t think that you’re sending out a confusing message to city residents? One minute you’re touting plans to introduce low emission zones, reduce traffic, increase bike lanes etcetera in the drive to carbon neutrality then the next minute your increasing emissions, increasing traffic and removing bike lanes” I ask him.

“Not at all, it’s very clear what we are doing. We are removing cycle lanes, reducing the width of footpaths, reducing the size of all parks and green spaces. Any space used by cyclists and pedestrians we will be reducing it. Even Arthur’s Seat. We will then increase traffic throughout the city making the place unbearable to walk and cycle around.”

“But our analysis has shown that over time these measures will cause a massive drop in emissions and climate disaster will be averted as a result thanks to the Herculean efforts of our citizens.”

“That makes absolutely no sense Adam” I say.

“Of course it does” he replies as he pats my shoulder before hoping back into his Porsche and driving off along the footpath on Princes Street blasting his horn and shouting at oncoming pedestrians who have to scramble to get out of his way.

So how do you feel about the removal of Spaces for People in order to increase traffic flow through the city? Is it in keeping with the council’s low emission drive? We’d love to hear from you. Get involved. Leave a comment.