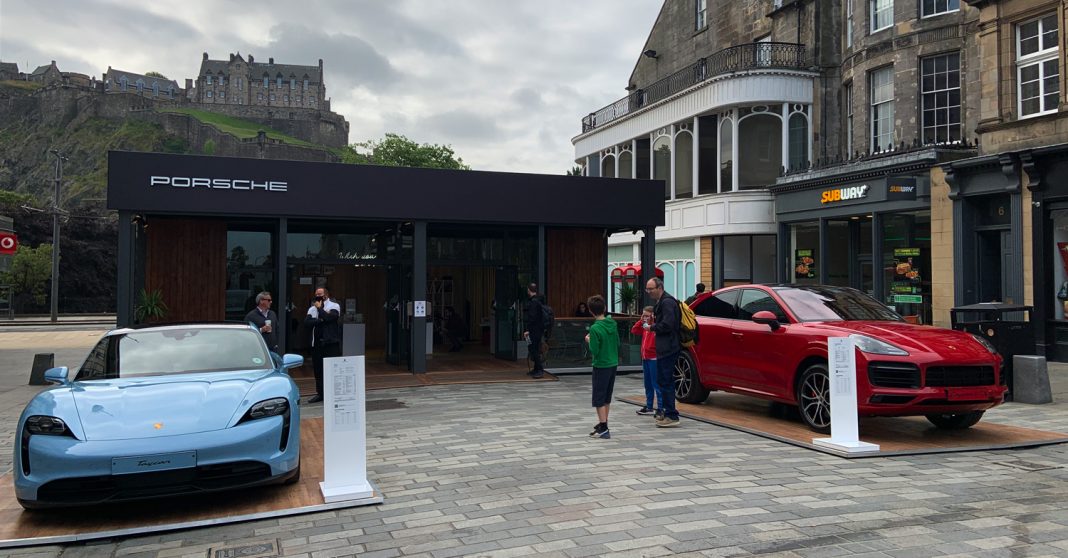 Edinburgh council has claimed to have edged a step closer to carbon neutrality after hiring out Castle Street to Porsche who are promoting their latest range of gas guzzling vehicles there.

“Achieving carbon neutral status in Edinburgh is no mean feat and it’s going to involve a Herculean effort by public bodies and partners right across the city. The scale of the challenge is huge, but what our work to date has shown is that this is achievable.”

“We’ve identified Porsche as an immediate partner, together in the short-term we can progress to reduce our carbon impact.” says straight faced Edinburgh council leader Adam McVey clambering out of his new yellow and black Porsche Boxster.

“You don’t think that you’re sending out a confusing message to city residents? One minute you’re touting plans to introduce low emission zones, reduce traffic, increase bike lanes etcetera in the drive to carbon neutrality then the next minute your hiring out Castle Street to Porsche” I ask him.

“It’s a bit like promoting McDonald’s or Burger King in a bid to tackle Scotland’s obesity problems is it not?”

We walk behind the Porsche stand and he points to the big image printed on the back.

“Say what you see” says McVey pointing at the image.

“I see a Porsche driving on a mountain road” I reply.

“Yes but what else do you see?” he asks.

“I’m not here to play silly games Mr McVey but I see some birds and some wind turbines” I reply.

“Exactly! Wind turbines!” McVey claps his hands in sync with each word.

“Yeah, but they’re just in the photo! They aren’t connected in any way to the car apart from being in the same photo.”

He looks confused and after a short pause repeats his previous statement.

“But… but it’s clean energy!” he says moving closer to the image and pointing at the wind turbines.

“Yeah but the clean energy has nothing to do with the gas guzzling Porsche. There’s no connection apart from the two things being in the same image. It’s a trick.” I say but alas it’s too late as McVey has bolted back towards his shiny new Porsche Boxster whilst spouting more doublespeak.

“Tackling climate change and our city’s carbon emissions is a shared responsibility that must be driven by strong partnerships with the likes of Porsche, Ineos and BP. Gotta run now. I’m a busy bee” says McVey.

He toots his horn and waves out the driver window as he buzzes off in his new yellow and black Boxster.

“To bee or not to bee” I shout after him. I have no idea what I was trying to say. It was in the heat of the moment.

So how do you feel about Castle Street being rented out to Porcshe? Is it in keeping with the council’s low emission drive? We’d love to hear from you. Get involved. Leave a comment.