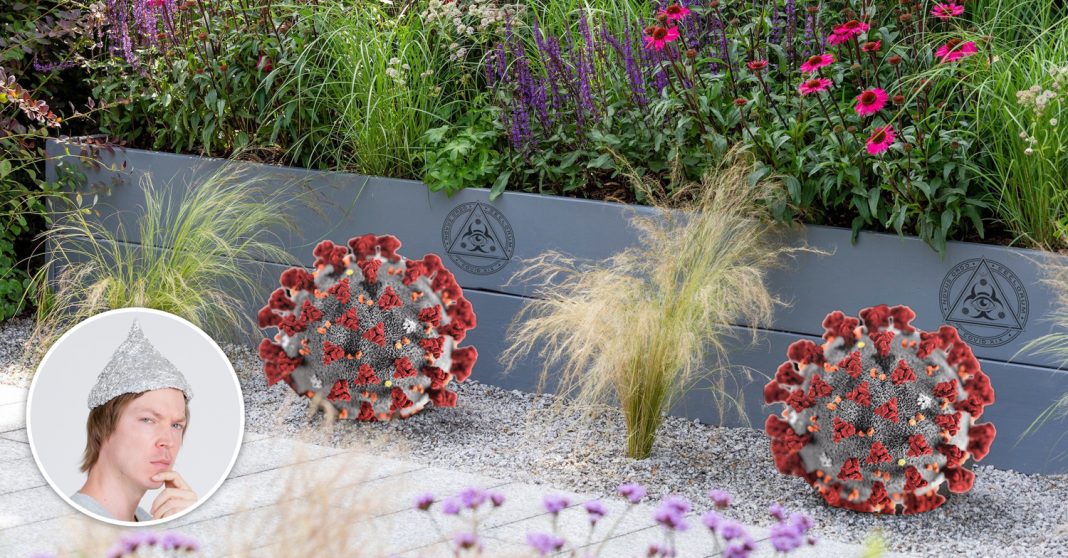 From gardens to government. A part time Edinburgh gardener has been left flabbergasted at the news that she has been selected to head up the new UK Government Dept of Infectious Diseases.

Condo Terra who owns her own gardening business in the city received the call from Westminster on Wednesday morning.

“I obviously thought it was a joke at first. I’ve been very active on Twitter during the pandemic and the platform does attract it’s fair share of nut jobs and quacks so I was more than a little skeptical” says Condo.

“After a bit of a toing and froing, I was satisfied it was a genuine call. It’s hard to tell fact from fiction these days. There’s a lot of .. ”

Condo makes a cuckoo like whistling noise while rotating her index fingers around both her temple areas.

“The government spokesperson told me that the current administration were very impressed with my in-depth knowledge of infectious diseases and had been keeping a close eye on my Twitter feed.”

“On Tuesday night a group of ‘so called’ highly trained and experienced specialists from around the world released some data concerning the current spread of Covid and what measures we should all be taking to slow the spread down.”

“I tweeted that they had obviously got it all wrong and that they should recheck their data. A lot of people agreed with me and liked my tweet. I went to bed satisfied that I had called these so called ‘experts’ out and that some people had been influenced by what I had said. I felt like my life finally had purpose.”

“Next thing I know I get a call first thing the following morning.” says Condo Terra

“It did take us a while to figure out what arse elves were and what they had to do with the current spread of Covid. But one of our boffins finally cracked it. A simple typo on Condo’s part.” giggles Phelan Betere, chief medical advisor to the current UK government.

“After correcting the remaining grammatical errors we all agreed with Condo and that we should sit down to go over the data one more time” he continues.

“The seed of doubt had been planted and in the end we threw our hands up and capitulated. Condo had a point, maybe!” continues Phelan Betere.

“We weren’t 100% certain. So we took a look back over her past tweets which included advice on boycotting China, to stop wearing masks, to avoid vaccines and to stop listening to professional infectious disease experts and look to the likes of Uri Geller the spoon bender for advice and guidance instead. She also called out self isolating after coming in contact with someone with Covid as utter madness.”

“We took all this data on board, discussed our findings and we all came to the same conclusion. We need her on board! So we high fived each other then I called the PM who was on a gifted holiday in the Seychelles with his bit on the … ”

At this point of our interview an official looking guy in a suit wearing dark glasses and an ear piece rushes over to Phelan Betere and whispers something in his ear.

“Sorry, can you take that last sentence out?” Phelan asks looking rather sheepish.

“Of course” I reply.

“What I meant to say was that I called the PM at his flat in Number 10 where he was with his wife and new born child. I told him the situation and he gave us the all clear.”

“We called Condo and told her we would love to have her on board Hygieia, the ship of the nations health, to help steer it through the stormy waters of infectious disease and onto the more tranquil seas of collective health and well-being.”

“We are pleased to say that, despite her telling us that the ship would eventually fall of the edge of the earth, we have agreed a three month trial period starting on the first of next month.”

“Yeah, I’m really looking forward to getting stuck in” says Condo Terra when I ask her how she feels about her new role.

“These guys, despite their qualifications and years of experience in the field clearly have no idea what their talking about. I’m keen to put them all right and talk some sense into them.” continues Terra.

“Will you continue with your gardening business or will you be hanging up your hoe for the the foreseeable?” I ask her.

“Well I suppose the work I’ll be doing will be a bit like gardening in many ways. Germinating new ideas instead of new seeds. Sowing seeds of fact instead of wild flower. Dead heading the idiots in the department instead of old tulips. Cultivating a culture of truth and trust instead of rows of sweet peas and rhododendrons. Weeding out …”

“Ok ok I get the idea. Thanks for your time and good luck with your new role.” I interrupt bringing our interview to an abrupt end.

So what do you think about a part time Edinburgh gardener being in charge of UK Government Dept of Infectious Diseases? Is the nations health in safer hands?

Have your say. Join the debate. Leave a comment.