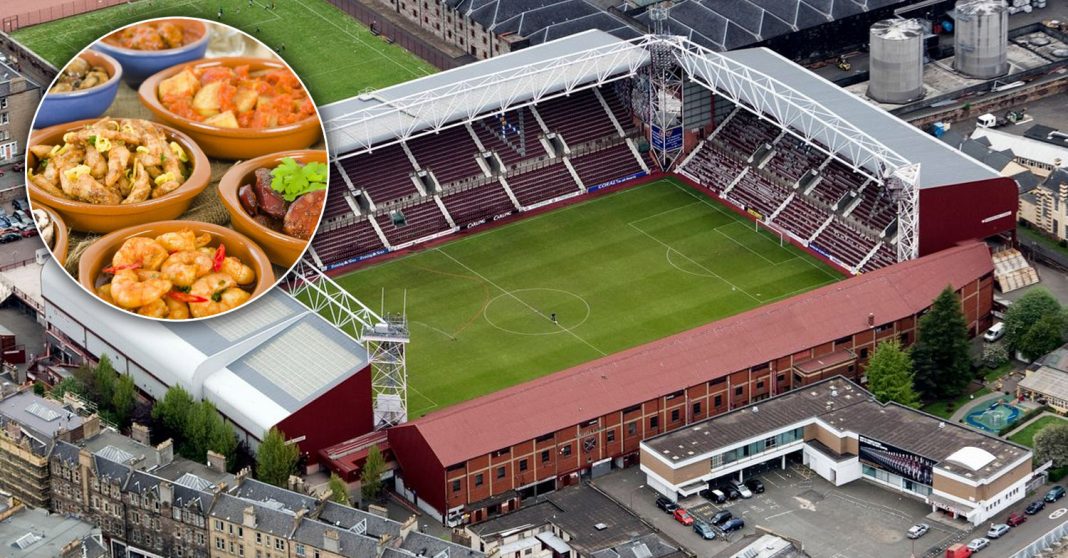 Over the years there have been thrilling comebacks, agonising defeats and the some great European nights to remember in Tynecastle but unfortunately nothing to write home about in recent seasons.

So fans have begun to vent their frustration on The Twitter and The Facebook at the lack of European action at Tynecastle of late.

To appease the growing unrest amongst the Hearts fanbase, the powers that be at Tynecastle have come up with a rather novel idea. Tapas Thursday. Thats right you read that correctly. Tapas Thursday.

Starting on the 7th October Tynecastle will throw open it’s doors to their fans to enjoy a European night with a difference. All laid on by the club for free.

“We’re starting with Spanish Tapas Thursday because I’ve just got back from a week in Alicante and the food was absolutely delish! I have no doubt the fans are going to love Tapas Thursday.

“We will put on a massive spread in the stadium and play some of the highlights of our best outings in Europe over the years up on the big screens. It’ll be fan … tastic. Did you see what I did there?

“We’ve even booked a Prestonpans tribute act of everyone’s favourite Spaniard Julio Iglesias to come in and belt out a few of our favourite Iglesias tunes. He’s called Danny Boy or ‘Dan from the Pan’ as he sometimes likes to be called. I think he does requests.

“Then in November we’ll move on to German Sausage Saturday. We will switch to a different European country every month.

“The first team players will dress up in the traditional clothes of the European country of the month and serve the food to the fans. A really exciting development and something for the fans to look forward to over the 2021/2022 season.”

We interviewed a spokeperson for the Heart of Midlothian fan club about the latest idea to come from Tynecastle.

“I thought it was a fucking joke when I first found out about it. When we said we wanted more European nights we didn’t mean free fucking picnics in the park! Whilst watching old European games! What the fuck is that all about?”

Another disgruntled fan said “We need players not paellas and pretzels. This is typical. Just typical. Although I do enjoy a good tortilla it has to be said. I’m quite looking forward to Tapas Thursdays to be honest.

“And German sausage whats not to like!? Free too! And come to think of it a pretzel does look a bit like our club emblem. Be cool if the could bake a few of those eh!?”

What are your thoughts? Paella or players? Will you be going to a Tynecastle European night with a difference? Leave a comment below.

Share
Facebook
Twitter
Pinterest
WhatsApp
Previous articleCan anything cause current fuel panic to escalate? Well if any thing can the jerry can can
Next articleBoner contention as study finds 8 out of 10 Edinburgh traffic wardens can’t get it up
- Advertisement -