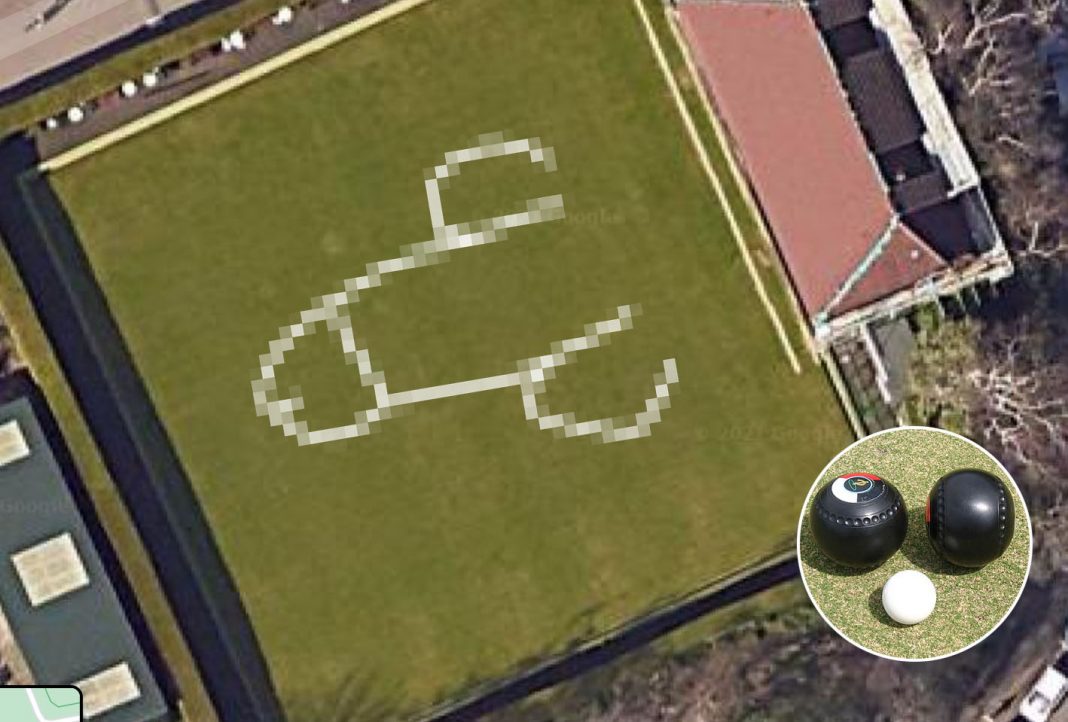 A large painted penis has brought members of a local bowling club to their knees!

Green keeper and part-time police officer George Grassman arrived to the club early Saturday morning to trim his green before the grand final of the Shot In The Dark sponsored Provincial Playoffs that were due to take place there that afternoon.

“I opens the gate into the green and goes ‘Hello hello hello! What’s all this then!?’ On closer inspection I saw that it was a great big freshly painted cock and balls. At least 30 foot long it was! I couldn’t believe my bleedin eyes!”

Choking back tears Club Captain Barry Bowles described the scene when he arrived onto the green.

“When I came on to the green George was at the tip of the cock. I was standing next to the testicles. It was absolutely massive, really wide too. It was a monster of a thing. What sort of sad bast**d would do such a thing!?” sobbed Bowles “On the day of a big final play off too! Bast**d people!”

“We tried to rub the tip off using our hands but it was just making things worse. We ended up getting white splodges everywhere” said Grassman “It was never going to be cleaned up in time for the final. So we had to pull the plug unfortunately”.

“When the others arrived, we broke the news and it was decided that instead of us all blowing our tops we should form a prayer ring around the giant penis and pray for the poor fellow who did this. So we got down on our hands and knees and offered up our thoughts and prayers” said Bowles. “Then we had a group hug. We all felt much better after that.”

“We discharged the umpires and other volunteers from their duties for the day and will try to reschedule the final for next Saturday. But that all depends on whether we can get the painted penis removed on time. We’ll do our best to pull it off” said Grassman.

Share
Facebook
Twitter
Pinterest
WhatsApp
Previous articleSo is metal detecting on Portobello beach really as glamorous as it looks?
Next articleMan in a hurry for a McFlurry nearly gets his nuts crushed by Edinburgh tram
- Advertisement -